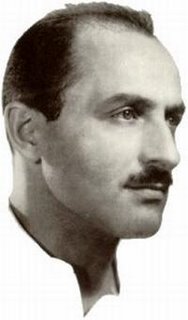 By most lights, I have many odd items in my recording collection. But among the people I hang out with on-line and in the contemporary music scene, of course, most of these things aren't odd at all. Indeed, they're largely things we'd expect to find in each others holdings. Still, there are a few pieces of music that I hold dear which, were they heard at all by my confreres, would likely be looked at askance. Extremely askance.

One of them is Marc Blitzstein's "Airborne Symphony". I picked this up probably back around 1975 on a Columbia LP reissue of the original recording done, I believe, in 1946 with Bernstein conducting the New York City Symphony and with Orson Welles as narrator. The release I bought had an amazing cover, a photo that you'd likely call "socialist realist" in style except that it's resolutely American in tone; "capitalist realist", maybe--a heroic head shot of a bronzed young pilot framed against an imposing propellor. I'm mightily pissed that I can't locate an image of said cover on the Net. If anyone succeeds in doing so, please let me know. [ooh! ooh! Found one! Dark, but better than nothing: 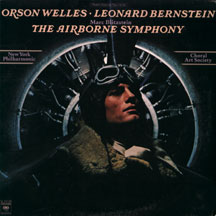 The piece was a wartime Air Force commission to celebrate the history of flight, something that, in more hacky hands, could have become a pretty risable object. Blitzstein, however, was an interesting character. Though having had a long and involved history with the American Left, he was of a generation that still retained a great fascination with all that capitalism had produced and, I imagine, saw no contradiction in melding the two forces. Of course, given that the commission came from a military body, the leftist aspects had to be camouflaged discreetly so Blitzstein fashioned a kind of cautionary tale, reveling in the history and glories of flight but casting a baleful eye toward its potential (unavoidable?) use as a force for evil and destruction.

The music is a wonderful melange of styles, heavily spiced with the American vernacular of the 40s both in musical style and text. There are, unsurprisingly, martial references but also jazzlike sections, US folksong aspects, sentimental balladry, etc. Welles teeters right on the edge of excessive bombast, snarling out some lines so viciously he overwhelms the mid-40s microphones but, as in the extraordinarily poignant and sorrowful "Ballad of the Wounded Cities", is also bone-chillingly somber. The piece tracks flight from Icarus to Leonardian balloon fantasies to the Wright Brothers. Through WWI and, in its last half, to its use in contemporary warfare against fascism. Some of the sections are pretty hilarious, like the "Ballad of Hurry Up", detailing the frustrations of ground crews when their missions are readied and aborted, multiple times. How often does one hear "Snafu", "Fubar" and "Tarfu"(had to look up the latter) in a "serious" classical work? One of the most purely gorgeous songs is "Night Music: Ballad of the Bombardier", in which a "19-year old bombardier" writes a letter to his sweetheart on the evening before he leaves on a bombing mission. Sung in a pure tenor, it's the sort of thing that many would find overwhelmingly schmaltzy and utterly unlistenable but, to my ears, it's rendered so humanly and convincingly that it's devastating in emotional impact.

The Symphony ends in an appropriately chaotic welter of massed aircraft, on the tipping point between use as an instrument of peace or of war now that Hitler's been taken care of. Welles, in the midst of a triumphant celebration, bellows out cries of, "Warning! Warning!!".

An absolutely amazing piece of music, imho. I'd gotten a later rendition (also with Bernstein) on disc a couple of years ago which, while OK, lacks the passion of the Welles version. I just found that on another disc and have it on order. Looking forward to hearing it once again in all its conflicted glory.
Posted by Brian Olewnick at 11/02/2006 08:56:00 AM

If you want to mess with someone, take one of the symphonic passages, play it for a friend, and play a little game of "guess the composer/guess the piece." I think this is a gorgeous work. Thanks for posting some of the libretto, was searching for a particular line. Of course, hurry up, hurry up, hurry up ... and wait. "Emily" does show up every once in a while in a recital program, but the entire work really does deserve more live and broadcast performances. Thanks!

Hah--took twelve years to get a comment, but thanks! Still love the work.