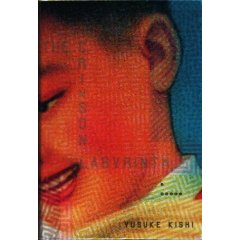 Over the last few years, I've been reading an awful lot of Japanese fiction, generally of the "serious" variety (Abe, Endo, Kawabata, Oe, etc.). Murakami, whom I often love, was probably the most popular of these authors though, of course, he's quite serious in his own way. Last week, on a whim, I picked up Yusuke Kishi's "The Crimson Labyrinth". As is often the case, I was initially intrigued by the cover with its high magnification of what appears to be some kitschy illustration, a nice abstraction of a banal image. Scanning the exterior blurbs, I saw that Kishi was being championed as a "rising new star of horror" and that the plot of this one had to do with some characters plopped down into a "real" computer strategy D&D adventure. It seemed silly enough but it had nonetheless pricked my curiosity, so I picked it up.

I'm only about halfway through so I'll suspend ultimate judgment but I've been happily surprised to find that it's at least somewhat more than its superficial aspects. Indeed, I'm picking up a great deal of Murakami here from the main protagonist (40-ish, drifting, confused about women) to the very matter-of-fact style of writing that hides all sorts of agitation beneath its surface. The plot is indeed on the fantastic side, though I'm not sure it's something Murakami wouldn't have considered, at least around the time of Wind-Up Bird Chronicles. A group of strangers awaken in a remote, desert-like environment where it quickly becomes apparent that they are "players" in a real-life strategy games, receiving information via handheld gaming devices similar to PSP2's . It's silly in one respect (if not several), or course, but serves to lay out a pretty fascinating (again in an understated Murakami-like fashion) array of human interactions. We'll see how it ends.

Kishi has apparently written a couple of things previously, "The Black House" and "Isola"; curious if anyone's read them. More, I'm interested in learning about other popular Japanese authors who may, in one way or another, be thought of as heirs to Murakami. Lemme know!
Posted by Brian Olewnick at 11/17/2006 10:19:00 AM