Maybe it will become something of a trend--maybe it is already and I've only recently encountered it--but two recent releases combining music and interactive video have made their way into my paws. These don't, just to be clear, consist of videos accompanied by music. In each case there's a direct connection between the musician and what appears on the video, both performers improvising, the images changing in real-time depending on what gets played and relayed.

"Gdansk Queen", created by Toshimaru Nakamura and Billy Roisz (known, in duo, as AVVA) was released a couple months back on Erstwhile. Toshi's one of my favorite musicians extant, half of what for my money is the finest release of 2006, also on Erstwhile, 'between', with Keith Rowe. I'd seen Billy Roisz' work a couple of times previously, both in live contexts, once at Tonic, once at the Austrian Cultural Center. In each instance, I found it only mildly interesting. Let me backtrack.

I'm not an expert on avant video by any means, but I've seen my share of it since the early 70s. My tendency, especially if the work is more toward the abstract, is toward pieces of visual, formal depth. I have something of an aversion to flatness in the visual arts and certain branches of abstract video play to that hand. Images that I think I can grasp the essence of in a short time quickly begin to bore me when they hang around. It's not as simple as that, to be sure, but there are certain elements that tend to reappear in many videos...hard to describe as a class, except they're often "crisp-edged" and thin appearing. Vague, I understand. In any case, that had been my impression of Roisz' work previously and, while it's mitigated to an extent on the AVVA release, that's still an aspect I have trouble with. Another is the direct, one-to-one correspondence of the sounds created by Toshi to the changing of the video images. Toshi's contributions are really pared down here, his no-input mixing board sounding more unprocessed than normal, generating more the type of sound you'd expect from such devices "out of the box". In and of itself, that takes some getting used to and I'm not quite there yet on much of it. A noise emerges or modulates and the video alters in some manner. Roisz, presumably, is also at the same time introducing variations into what can change, how it will change, etc. I find, a little paradoxically perhaps, that when really concentrating on it, I have a difficult time maintaining interest. When I played it on the monitor I have adjacent to my PC at home, when it became one of several activities in the room, I found it much more engaging. I don't know why exactly, and wouldn't at all be averse to the notion that I'm simply not getting what there is to be gotten. On the other hand, there are several moments when things do indeed click for me and, suddenly, the piece attains a degree of profundity, though I'd be hard pressed to delineate why it worked here and not there. Maybe it'll sink in in a few years. 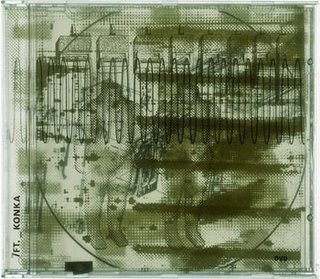 I posted a review earlier today of theMichael Renkel/Sonia Bender DVD, "7ft._KONKA" at Bags, here so I won't go into too much detail. Suffice it to say that Bender's video renderings are far more to my taste, generally speaking, using imagistic, dreamlike themes that are at once beautiful and disturbing, layering them in a manner that evokes Rauschenberg prints from the 60s (always a big favorite of mine). I had a suspicion that Renkel was splitting the signal from his guitar into several, only one of which was influencing the video at a given moment. Purely based on what I was seeing/hearing, this seemed to be the case as you can sometimes discern a relationship between a sound and a visual change, but it's often buried beneath other waves of sound having no apparent effect on the video. I mailed him and asked him about it, but he says there's just a one-to-one correspondence. Dunno, I remain a little unconvinced of that--maybe a lack of good communication betwixt German and English--but if so, the effect is certainly different than with the AVVA DVD, much more organic and hypnotic.

As I said in the review, I have a feeling that certain moments of the AVVA are deeper than anything on "7ft._KONKA" (and, no, I've no idea what the title refers to. The Konka is a river, I think a tributary of the Dnieper, but what 7ft. would have to do with that, I dunno). There are points where everything coheres and the work becomes fundamentally mysterious. But on the whole, the Renkel/Bender work provided more pleasure. Not that pleasure need be the sine qua non, but....

So, I expect we'll see more in this vein. I imagine someone's already tried the reverse approach: have aspects of the video image generate sounds, the sound performer modulating them on the fly. Hopefully it won' t become a de rigueur thing, though, where everyone feels they have to do such a collaboration. Should only occur, like anything else, when it's necessary to concretize an idea.
Posted by Brian Olewnick at 11/22/2006 10:43:00 AM