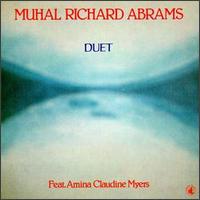 Back in my Environ days, Amina Claudine Myers was a frequent presence both in our loft and others. A charming woman, she cut a unique figure on the scene. She was (still is, I suppose) a bit short with a somewhat stunted posture (I suspect something odd with the spine), tended toward floor length African-print sarong-type attire and was probably the first person I ever saw, around '77, to style her hair in lengthy tight braids with all sorts of shells, metal and other trinkets wrapped therein. She was also one of several musicians who overtly had never lost the connection between blues and sould bands and the avant garde, having come up, if I'm not mistaken, as an organist for many a smoky bar band as well as for gospel choirs. If she was in a group, you could always count on at least some of the music being deeply grounded in the tradition. And she was always a peasure to deal with.

For several years prior to this '81 recording, duos had become very popular. While part of the reason was musical (conversationl free improvisation at its most minimal an uncamouflaged) there were strong economic imperatives as well. Duo piano albums were pretty unusual, though. Not sure if there was a precedent for this, at least among US free jazz musicians (someone can correct me if I'm wrong). With Myers alongside, Abrams' increasing tendency toward dry formalism was nicely muted and the result is a solid, enjoyable recording. Nothing too spectacular or earthshaking, but solid with an abundance of blues-soaked playing and even boogie in the finely titled, "Down the Street from the Gene Ammons Public School". The lone free, Taylor-ish track doesn't fare very well --much storming about, little left to ponder--but it leads into the highlight of the session, Myers' beguiling "Dance from the East", an extremely catchy, motoric composition that whizzes along with cheerful abandon. Listening to it now, I'm reminded, of all things, of Ron Geesin's solo piano pieces from albums like 'Patruns'. "Duet" closes with a lovely, balladic tribute to Abrams' wife, Peggy.

Finished Kishi's "The Crimson Labyrinth". It's a light read in most respects but I have to say it kept me fairly rapt throughout. I'm thinking of the author now as Murakami's younger, still comic book-reading, games-obsessed brother. Curious to see how he progresses and mildly interested in reading his previous works, though I'm not sure if anything else has been translated into English--don't think so....though I see three films have been made from his books in Japan.
Posted by Brian Olewnick at 11/19/2006 09:37:00 AM

I saw Amina Claudine Myers - in duo - with Archie Shepp on the 24th of march 2004 (I know because I blogged about it), it was great.