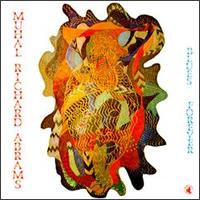 One odd thing right off the bat: I guess when this album, "Blues Forever" was issued on disc they reoriented the cover painting because mine, on the original vinyl, floats horizontally. I suppose it makes sense in that the face drawn in gold does stand that way. I always figured there was something to his sideways-ness, but maybe they simply screwed up the image first time through.

Anyway, next in line for Abrams' continuing work with mid-size bands, this 11-piece date from 1981. And, as mentioned previously, it pretty much sticks true to the unfortunate model of one killer, relatively straightahead track and a passel of less interesting, more academic ones. Oh, there's the brief (2 minutes) "Du King", a kind of rave-up you'd hear from the World Sax Quartet, but it's more bluster than substance. The band has lost something personnel-wise, with utility infielders like Eugene Ghee, Jimmy Vass and Michael Logan sitting in. It also features the newcomer Jean-Paul Bourelly who, difficult as it may be to believe these days, once showed a great deal of promise. "Duet for One World", closing out Side One, plods along more mercilessly than almost anything I can imagine. (Just about alone among people who listen to this stuff, I'm no big fan of Sam Rivers' "Crystals", but if you enjoy that, I suppose you might like this one too).

Ah, but then the title track. Gooey, dirty, slimy, wonderful slow blues. Bourelly playing the way he should've for much longer, a richly voiced horn back-up, nicedeep bass. Craig Harris with a fine muted solo, the riffs varying beautifully, Muhal at his bluesiest; man, when he gets cooking, he's unstoppable. The tempo picks up midway through, Baikida Carroll strutting finely, the hugely undervalued Wallace McMillan with a strong baritone statement, the pace slowing down to an ooze, taken out with a bang. Wonderful stuff.

But then it continues....the chant in the following number, "Cluster for Many Worlds", is simply painful to experience. The words were inscribed on the back of the record with Amina; they read pretty awfully there--they sound much worse when actually spoken. The final cut, "Quartet to Quartet", for the musicians sans rhythm section at the start, is the kind of romantic/academic piece that Hemphill could pull off. Abrams gives it a go, but it goes into serious meandertude after a couple of minutes and never really gets back on track until it eventually breaks into a tight little rampage in a neo-bop vein. Still, more mess than meat.

Sometime in the late 80s, I made a compilation tape of all the amazing single tracks from Muhal's albums of that decade. That was a nice tape.

Abrams did the painting for his first album, "Levels and Degrees of Light" (which, unaccountably, I don't have) and with this release, began to use his works routinely for covers. I go back and forth on them, myself. This one is rather nice but sometimes the fauxness of the Africanisms gets to me, much like my reservations on the Art Ensemble's use of "tribal" paint.

FWIW (and maybe unsurprisingly), it's always been the semi-academic, mostly composed pieces that I've loved of Muhal's output. And the apparenly obligatory (to me, obnoxious) blues tune on each release that I've often had to skip!

You know, in relistening, I've been especially concentrating on those "academic" works and, for the most part, they still don't click for me. Maybe they're just too set in my memory, with all their baggage, for me to alter my opinion, dunno.