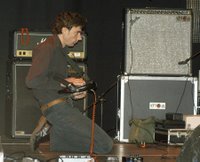 Whatever happened to Caspar Brotzmann? I'm playing some of his discs at home today (I think I have most of his legit output) and finding, as I have before, that his music holds up far better than I would've thought. Better than much of his dad's stuff, in fact. Raw, brutal, utterly unpolished. Really some of the most exciting power trio stuff I've heard in the last couple of decades, Germany's answer to Fusitsusha.

Not much found on-line, not even many photos. AMG shows nothing since 2000's "Mute Massaker" which I recall (and said as much in my review there) was overly noodlesome and relatively lacking in ferocity. Anyone know the story?
Posted by Brian Olewnick at 11/11/2006 03:31:00 PM

I've seen him live maybe two years ago in Ljubljana playing in trio w two swiss musicians (under name Caspar Brötzmann's Experiance (sic!)) Wertmuller & Piakas (after that i've seen these two playing w his father): The music itself didn't move much from it's previous form the only change is that Brotzmann jr is fed up w music buisness so he don't want to deal w record labels, promotors, etc ...
he said that now he is just playing for his own pleasure and don't have intention to release music, promote his gigs, etc ...

Interesting about CB (aside from his band's name! Yikes.) From what I'd gathered of his personality, it's not the sort of move I would have expected. I'd be less surprised to have heard him making an overt move in a rock direction. Good for him, though.

I'm sort of black-humoredly unsurprised to hear that his current band is called the Experience; Mute Massaker (which I like a lot) seemed like a series of variations on Hendrix's "Peace In Mississippi." I wish he'd come back; I saw him live in the mid-1990s (supporting Home by opening for Helmet on tour) and he was terrific. I have all the Massaker CDs, even Black Axis, which I understand is somewhat difficult to come by.

I saw the Brötzmanns in duo a year ago. I liked it a lot. Caspar played droney backgrounds and Peter did his free-power-ballad thing on top. Even when he soloed with some single-note lines, Caspar kept up the massive drones, as if he were playing tampura.