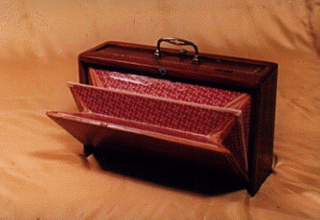 A few weeks ago I received a lovely recording called "In" by the Norwegian percussionist, Ingar Zach, whose music I've only come to know in the last year or so but which I've enjoyed a great deal. It's a solo outing, on the intriguingly named Kning label (maybe not so intruiging to a Norwegian, but certainly to me). On the sleeve, Zach is listed as playing percussion and "sruti box". This last term was unknown to me so I dutifully googled and discovered that a sruti box, pictured here, is a common South Indian accompanying instrument, roughly analogous to a harmonium, powered by bellows. Indeed, much of the central section of Zach's piece incorporated the sort of sounds that would seemingly emanate from just such a device: organ-y chords with a pronounced respiratory quality, a bit breathier than a harmonium perhaps, but in the same ballpark. As there was a bunch of other activity occurring simultaneously, I did briefly wonder if Zach had pulled all this off in real-time, if there were mechanical aids of some sort or if the session involved overdubbing. After all, the sleeve didn't include an admonishment, as some are prone to anally do, to the effect: The sounds contained herein were created WITHOUT ANY OVERDUBBING. OK, stop shouting.

So I wrote up the review, posted it on Bags this moorning and sent Ingar notice of same with a copy of the Word file, my normal routine. Ingar responded, not perturbed but just sharing info, that the sruti box utilized for the recording, was in fact of the electronic variety, one that could be operated without need of the extra bellows-pushing appendage, thus freeing them for more percussive work. This pretty much rendered a portion of my review inoperable but, as is my tendency when things like this crop up, I left it intact and added an explanatory comment. 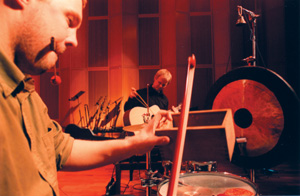 It's minor in the scheme of things, of course, as the music is more important, by several levels of magnitude, than the specific means with which it was created, but it's something you do like to get right if possible. But when you're dealing with music in this general field, when it's all but impossible to specify exactly how a given sound is being produced, whether its source is being masked, processed, subject to software algorithms, etc. it's often a fool's errand to think blunders like this won't occur. You go with what you think you're hearing and if you're mistaken, that's the way it is.

so, how do you handle "electronics" as a credit?

some albums I've heard (recent improv at that) have actually benefitted from overdubbing/editing. Gunter Muller has a couple releases that have been sculpted after the fact. Otomo Yoshihide/Park Je Chun/Mi Yeon "Loose Community" features overdubs by a host of cool folks...some examples, a tangent, etc. friday!

Depends what I previously know about the musician in question. Sometimes I'm pretty familiar with what a general term like "electronics" indicates in a given instance (though there's still, of course, a chance things will have changed) and can extrapolate from there. And often there's some accompanying literature that goes into the why's or wherefore's of a disc's construction, post-processing, what-have-you.

But just as frequently, things will be left mysterious, sometimes deliberately. This is totally, absolutely fine, of course. If I get the impression that the artist actually prefers not to reveal the technical nature of what's going on, I'll respect that (and admire the stance, usually). But if, as in the Zach disc, things are presented "routinely", ie, instrumentation listed, in this case a bit erroneously (not identifying the sruti box as electronic), I've no reason to believe otherwise unless something in the sound *really* makes me question the attribution, in which case I may try to get further info or verification from the musician involved.

Now, that in and of itself is interesting, I think, the way one bends what one is hearing to what one *thinks* is the case, instrumentally but if you're unfamiliar with the instrument as such and if (as far as I know) the electronic equivalent does a pretty fair job of emulation, well, whatcha gonna do?