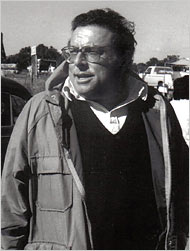 Saw in the paper this morning that Allan Stone had died. I used to frequent his gallery on East 86th St. after I moved to NYC in '76 as he showed several of the contemporary realist painters I was interested in (William Beckman, Richard Estes, Malcolm Morley) as well as painters like De Kooning, Thiebaud and Kline.

There was a receptionist who, as I was up there often enough, I began chatting with, eventually letting on that I too was a fledgling painter and she arranged for me to bring up some work to show to Stone. I returned with seven or eight pieces, leaned them against a wall and waited for Stone. He walks in, a gruff, short gorilla of a guy (if he wasn't actually puffing a cigar, he should have been), paces back and forth in front of the paintings for about 30 seconds, goes, "I like this one, this one and this one. I'll put 'em in a group show next month."

"Wow," thought I. "That was pretty easy!" So I went home, had the pieces framed and the next month found myself being exhibited at a fairly high level NYC gallery. Cool. Of course, none of them sold and (also of course) the next time I went up there, Stone hadn't a clue who I was. Reality check time.

But, thanks for the opportunity, Mr. Stone and thanks for showing a ton of really good work, much of it unfashionable at the time.
Posted by Brian Olewnick at 12/18/2006 08:57:00 AM