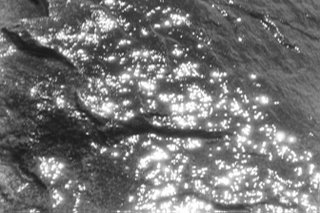 Volume 3 of Unseen Cinema is titled 'Light Rhythms: Music and Abstraction' and includes the Ralph Steiner work ('Surf and Seaweed') that initially inspired me to pick up this set. Those 13 minutes remain absolutely gorgeous as does his other film from around the same time, 'H2O' which arcs beautifully from fairly prosaic realism to dazzling abstraction.

But there were plenty of other finds on this disc: A fine short by Man Ray, 'Le Retour a la raison'; a number of works by Slavko Vorkapich, a name new to me, including "The Furies" and "Moods of the Sea"; some wonderful animations by Douglas Crockwell and Dwinell Grant.

But the killer was "Night on Bald Mountain" by Alexandre Alexeieff and Claire Porter who used a type of animation I thin kI've heard of but never seen involving a vast pinscreen in which thousands of pins are arrayed, adjusted for each frame. The result is unlike anything I'd seen before, a fantastic chiaroscuro effect with startling 3D, volumetric impressions. It's actually up on You Tube (can't post the link for some reason--google on "bald" and "Alexeieff" and it's the first recult) though in nowhere near the detail to really appreicate it.
Posted by Brian Olewnick at 12/28/2006 06:28:00 PM