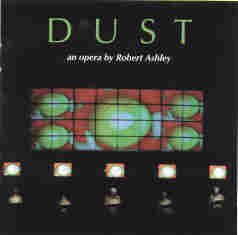 An unusual thing happend the other day. I was asked to review an upcoming performance. That doesn't happen very often at all. The performance in question is Robert Ashley's "Concrete" being staged mid-January at La Mama Theater in NYC and the review (assuming it's accepted) will be for ParisTransatlantic (not sure if Dan checks in here--if so, Hi Dan and thanks!). Now, Ashley and the Lovely Music stable can pretty fairly be located in the avant garde to at least some extent, never having become quite as mainstream-ized as those hacks who appear annually at BAM's Next Wave festival (a more inappropriate name is difficult to imagine) though, through people like Laurie Anderson, Ashley's ideas and conceptions have certainly filtered into the popular culture to some extent. In any case, the corporate distance between an event like the premiere of "Concrete" and, say, the ErstQuake festival, is still enormous, that gap illustrated by the "review package" that arrived yesterday. I'm sure this is entirely typical once the artists involved have reached a given level but it's new enough to yours truly to cause more than a chuckle or two, though not unappreciative ones. A folder with a thorough personal biography of Ashley, review quotes, copies of articles from recent years, etc. Best, though, and most surprising were copies of both "Dust" and "Celestial Excursions", 2-disc boxed sets of his last two "operas".

I've always dipped into and out of Ashley's catalog since around 1980 when I picked up the superbly titled, "Music Word Fire and I Would Do It Again Cuckoo" and through marvels like "Automatic Writing" (imposed on me by Jon Abbey--thanks, Jon!) plus hearing his work here and there on radio. But I was ignorant of these works and I'm kinda kicking myself now. The two discs comprising "Dust" are 66 and 24 minutes long--odd, but it makes sense after you hear it. Disc 1 is fantastic, moving evocations of homeless people, not so much the day to day miseries but more an examination of the psychological conditions that brought them to this point. Using everyday speech, sung/said by five vocalists, the stories are dreamy, sad, wonderful--David Lynch should collaborate sometime. Put it this way--I generally can't abide Tom Buckner (his upscale nasality seriously bothers me) but I could even tolerate him here. The final "fugue" on Disc one is amazing. He makes frequent use of a secondary dialogue, spoken/sung "beneath" the primary libretto, acting as a dreamlike obbligato--very spooky and effective. Strangely, and I assume this is the way the opera proceeded in performance, the final 24 minutes consist of five "Songs" (one of which, "Don't Get Your Hopes Up" I'd actually heard on a solo album by chanteuse Jacqueline Humbert) that verge on the blatantly mawkish though, again, one recalls Lynch and presumes the effect is intentional. 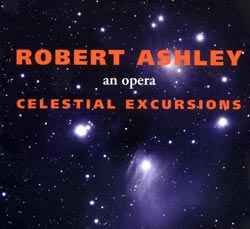 I have "Celestial Excursions" (not the greatest title I've ever seen) on at the moment and it's aesthetically in the same ballpark though I think requiring a bit more studious contemplation. The material concerns elderly people, slipping into and out of rational thought. The music seems a little bit more driven by "Blue" Gene Tyranny (who I tend to enjoy a lot), less dreamy, more dreamily-pop-referential.

According to the notes provided, "Concrete" seems to follow similar paths. "...makes public the ruminations of an old man and his reminiscenses of people he has loved and worked with--all of whom have gambled spectacularly with money and with their lives." We'll see but, given the depth and richness of these two works, I'm highly looking forward to it.
Posted by Brian Olewnick at 12/24/2006 10:41:00 AM