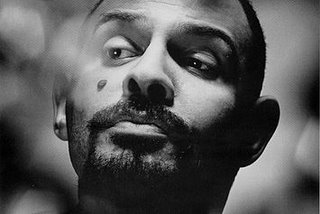 I'm not sure I can think of a musician whose work is fairly strongly connected to the rock milieu that I've enjoyed more consistently in recent years than Barry Adamson. Not that I listen to very much, of course, but...

He cut his teeth with Magazine and Nick Cave, neither of which/whom I'd know if I stumbled over their remains. My loss, perhaps. I think I came across Adamson entirely by accident, seeing his first LP, "Moss Side Story" in a used bin, maybe at a street fair, finding it intriguing looking (helluva cover photo) and picking it up. Good choice. Not sure what I'd pick as the antecedents of a work like this, a noirish soundtrack for a film in Adamson's head. In 1989, when this appeared, you had things like Zorn's "Spillane" available which, in somes ways, might be its closest approximation. Adamson shorts the irony, howe 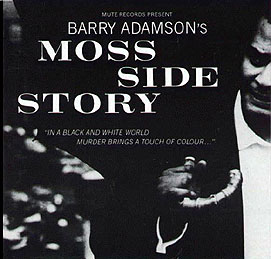 ver, and has more feel for funk and soul than Zorn ever did. While "Spillane" remains, for me, very enjoyable, the effect of Adamson's music is deeper, more resonating these days. [Funny--putting it on now for the first time in a while, I thought there were some Galas-inspired vocalizations on the first track. Didn't realized the divine Diamanda herself is here] Should've gotten him for the soundtrack of something like "Sin City". His signature vibes and organ are up front for much of this, along with latent industrial rhythms, a potent combination. He ends each side lifting the intro from Mingus' "Freedom" and, in some ways, Adamson can be heard as a kind of rock version of Mingus.

Looks like he got to do a real soundtrack next, "Delusion", directed by Carl Colpaert and starring the lovely Jennifer Rubin. Much more scattered album necessarily, though it closes with a fine version of "These Boots Are Made for Walking". 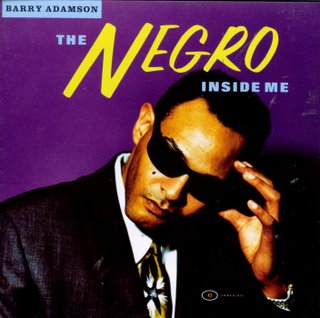 But then he really hits his stride with "The Negro Inside Me". There's a title that might brook some analysis. Another great cvover, too. It's listed on his site (which appears not to have been updated for a couple of years) as a single, though with six tracks and running 1/2 hour or so, I guess EP would fit. But two killer pieces, "The Snowball Effect" and his version of Serge Gainsbourg's "Je T'Aime...Moi Non Plus". The former with more tremendous organ work, a furious beat and (hey, this is 1995!) excellent sampled answering machine tape, his manager (female) trying to set up interviews with various media including Option and Reflex magazines. "It's kind of a snowball effect, I like it". As mentioned sometime last month, I played Adamson's take on the Gainsbourg piece along with Cibo Matto's at a recent record club, but his just kills. He launches into heart and soul, not holding back on the extreme sex-kittenish vocals or his own (? I think) surly counterpart, enhancing the whole with some brilliant string orchestration. The other tracks aren't bad either--a real nice, tight, powerful little package.

After that, I picked up both "Soul Murder" and "Oedipus Schmoedipus". They're each very good, each with some very fine individual numbers, several of them with the habit of lodging into the neurons that control my daily humming and whistling activity. I began to get a sense of drifting, however, and never followed up on subsequent releases. I recently noticed that a new one is available, "Stranger on the Sofa" which looks like it might be worth a go. Opinions, contrary or otherwise, welcome.
Posted by Brian Olewnick at 12/07/2006 09:27:00 PM