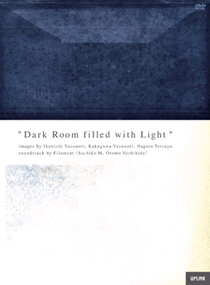 Just a note on yet another DVD music/video combo, this one called "Dark Room filled with Light". There's a fine review over at Bagatellen here by Robert Kirkpatrick so no need to go into depth on it. Musically, of the three recent such issues (AVVA and Michael Renkel being the others), this is by far my favorite. Ultra-spare, beautifully paced trickles of dusty noise by Filament (Otomo Yoshihide and Sachiko M) in two different "soundtracks" for the same hour-long video (you can choose which to play). The images, by Yasunori Ikunishi, Yasunori Kakegawa and Tetsuya Nagato are also relatively spare, entirely black and white (silvery grey and white, actually) and the less they're representative of actual objects, even microscopic ones, the better the video tends to work. When there's nothing but white on slightly darker than white, it's quite beautiful. The constant subtle flicker is fascinating to observe on its own.

The Filament dvd arrived here yesterday and I've watched it through once so far. The word that jumps to mind is stunning, both musically and visually.

And yeah those awkward Welshies...

I really love that DVD, one of the best things released this year in my opinion. Of course this proliferation of DVD releases forces some consideration of categorization. "Forced" to make an early top ten for our friends at audition I included this DVD. But I do think there is some issue with that for this isn't strictly a musical release. But I think that the music from this could stand on its own (though still intrinsically tied to the visuals) so I felt this was acceptable. Of course none of this really matters - I'm not creating any sort of ontology of human artwork. But this makes me think.

Robert, funny but when I submitted my audition list, I did so with the caveat that this one might possibly belong therein, but I'd not had a chance to listen more than once. Twice through now (surely, I need more) I'm pretty sure it would place.

Not too late to send an updated list Brian.

I'm really not sure if a dvd should be included in the list or not really, as it is very much an audio/visual experience meant to be experienced together. I agree with Robert that a CD issue of the music would be good as well, though would that not just be half the intended work?
I guess Otomo and Sachiko did something similar a while back with the Les Hautes Solitudes CD release anyway.

this DVD isn't really the same as the other two under discussion, as I believe the film was created on its own first, then the soundtrack was added later. I don't think the visuals are very good, very clunky at their more literal as Brian alluded to, and I need to give the music some more listens. it is interesting to hear Filament in a more spare setting, but I don't think I'm quite as sold on the whole thing as the rest of you.

I don't know if Robert or anyone else here knows how the video work was divvied up between the three people listed. Normally, I'd assume it was along technical lines, but given the differences in types of imagery, I'm wondering if it involves more direct input. Yes, when (for instance) the pictorial images begin "advancing" toward the viewer several minutes into the film, I cringed a bit. otoh, there's a section with a white, rotating stick-like construction that I found very beautiful.

As I mentioned at Bags, I bet the disparity of opinion in the visual arts between eai fans with very overlapping tastes would be pretty strong, even with regard to contemporary work (much less arguing Vermeer vs. Rembrandt). If we trooped through MOMA, there would likely be some areas of general agreement (I guess Rothko can do no wrong these days) but I could see disagreement among even such "old masters" as Pollock, much less about someone like Gerhard Richter (I'd be "pro" in that arguement).