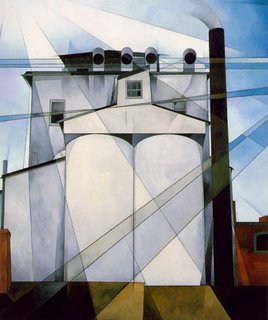 It annoys me no end that I can't locate an image of the original cover of John Adams' 1980 release on 1750 Arch that included "Shaker Loops" and "Phrygian Gates". It's been re-issued on disc but with a new cover, replacing the rather hilarious black and white image of Adams, adorned in wide-brimmed straw hat, against a night-time image of LA, big white collars jutting out over a sweater beneath a corduroy jacket, too-large glasses. Seriously goofy looking in an early 80s, Californian kinda way. Don't remember why I picked it up; I don't think I'd heard much about him before this, though a piece of his ("American Standard") appeared on the second release from Eno's Obscure label around '75, a recording I didn't know until sometime later. Probably it was just the wonderful title, "Shaker Loops" and the general knowledge that he was a "young" minimalist. That work holds up pretty well. It's already clear that Adams wasn't going to be as rigorous in his approach to minimalism as Reich (even the Reich of 1980), that there was a more Romantic nature at work. Interestingly, listening to it now for the first time in many years, some of the string writing here is very "reminiscent" of that found in Reich's "Different Trains" from some seven years later. As is often the case, I'm rather surprised how well I remember all the ins and outs of the piece. Side two is the solo piano work, "Phrygian Gates", performed by Mack McCray. The photos I see on-line of Mr. McCray all find him clad in tuxedo, hence won't see publication here. The piece strikes me as kinda Reich Lite.

Disturbingly enough, I'm also unable to find the cover image of my other Adams LP, his "Grand Pianola Music" (shared with Reich's "Eight Lines"). Jeez, doesn't anybody scan their old avant LPs anymore? Fortunately, the painting used on the cover is relatively well-known and also pretty spectacular, Charles Demuth's "My Egypt", seen above. Here's an interesting Demuth quote, from a letter to Alfred Stieglitz: "America doesn't really care - still, if one is really an artist and at the same time an American, just this not caring, even though it drives one mad, can be artistic material."

"Grand Pianola Music" is, in its own way, a pretty amazing piece of music. Steeped in Americana, unabashedly nostalgic it's almost Adams' take on Rzewski except without the political depth. Or, more cynically, with a Reagan-esque veneer instead of a Guevarian one. But the "Gipper" aspect of Reagan, the one that harked back to gazebo bands, lemonade on the porch and the passing marching bands. You can listen to it and enjoy it the way you might some 40s cornball schmaltzfest on film--there's something attractive about it even though you know it's ultimately unhealthy for you. A last gasp of innocence, maybe. 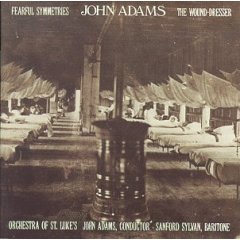 I saw Adams' "Nixon in China" at BAM around 1987, liked a couple of scenes, was left rather cold by the rest and pretty much lost interest. I think some well-meaning person gave me his "The Wound Dresser" later on, though I had a tough time slogging through it and have no intention of doing so now. As the perceptive reader may have ascertained, I'm loathe to throw out recordings (or books, for that matter) simply because I don't currently enjoy them. You never know. Twenty years from now, I may be saying, "What kind of idiot was I back in aught-six, not realizing the consummate beauty that is "The Wound Dresser?" Not likely, but.....

While we're on boring Adamses, there's also John Luther Adams, a composer hailing from Alaska, if I'm not mistaken, and whose "Clouds of Forgetting, Clouds of Unknowing" was foisted upon me by way of some glowing write-up (Kyle Gann in the Voice? I forget) which posited it as one of the greates works of the century or some such. Feh. "New Age Morton Feldman" is about as horrid a concept as I can think of and this comes pretty damn close. Kind of a cotton candy version of "For Samuel Beckett". Some nice sonorites here and there but endless and overbearing otherwise. But yes, I've kept it too.
Posted by Brian Olewnick at 12/06/2006 01:17:00 PM

With you on "The Wound Dresser" Brian, but I remember the other piece on that disc, "Fearful Symmetries" as being worthwhile. Perhaps I'll have a listen and report back...