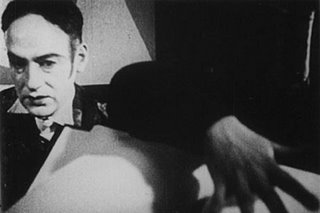 The second volume of "Unseen Cinema" is titled "The Devil's Plaything" and concentrates on surrealist aspects of early American film. Though like I'm sure millions of others, my first encounters with "serious" art involved Surrealism, I've long since become largely bored of it as a genre, retaining affection for the odd (imho) excellent example but...

To the extent the 18 pieces collected here display a Surrealist aesthetic, I don't find them particularly interesting except as regards given technical innovations. But to even call some of these "surrealist" is to stretch the term to accommodate what are essentially fairy tales in several instances.

The real tasty morsels here are those films which adopt and adhere to a visual sense owing much to German Expressionism, especially "The Fall of the House of Usher" (1926-28) by J.S. Watson and Melville Webber from which the above still was taken. Beautifully shot and paced, including dreamlike images that are actually redolent of dreams rather than Hollywood-ized variations thereof. Less artfully accomplished but still enjoyable were "The Life and Death of 9413-a Hollywood Extra" (1927, Robert Flary & Slavko Vorkapich)--I believe this was the one whose opening credits proudly proclaimed the fact that it'd been shot for under $200!--and another piece o' Poe, "The Telltale Heart" (1928, Charles Klein).

"The Hearts of Age" shows us Orson Welles' first screen appearance but is otherwise forgetful. The DVD closes with five shorts by Joseph Cornell, most using "found" footage (newsreels, largely), assembled--again if you stretch the point--in a manner related to his boxes. The last one, though, "Jack's Dream" (1938) is an appealing bit of puppetry.