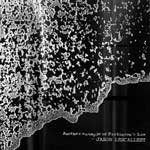 I own a grand total of only five 7" vinyl releases (If there are others, they're hidden within regulation-size LP sheathes and I can't remember them). They've been sitting for a while now, somewhat forlornly, me not having a working turntable until recently. So I thought I'd play through them.

First up was Jason Lescalleet's "Another Example of Parkinson's Law" issued on Freedom From Records, oh maybe four or five years ago, iirc. A fine little nugget, this one, Jason in rumbling old tape player mode, layers accreting like mold on a pavement. 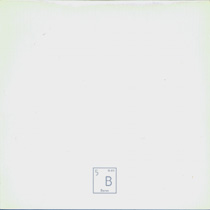 Next was the fifth release on Table of the Elements, Boron, by Keith Rowe, called "City Music for Electric Guitar" which is a piece by Frank Abbinanti, I believe, I think graphic in origin (have to check that). It's from 1992-93, an interesting period between his solo album on Matchless and the later solo work he'd do from '97 on. Side One is titled "We Want Some Minutes, OK?" although the extracted voice is pretty clearly saying, "We wait some minutes, OK?". Mine has a skip, making it sound as though the voice is on extended loop. Rowe's in serious guitar thrash mode here. Side B is "Scratch Music", I think a Rowe improv, and closer in character to what would come in the ensuing decade, delicious and mysterious, full of watery throbs, field recordings, etc. Great piece, all too brief. 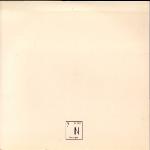 We arrive next at Jim O'Rourke's record on the same label, the Nitrogen release, both tracks apparently tributes to actors. "Muni" (Paul, not DJ Scott, surely!) finds him on acoustic guitar, somewhere between Bailey and Fahey, though closer to the former. (This one's at 33 1/3, btw, the previous one at 45) Good, sensitive track. "Michel Piccoli" (star of Godard's "Contempt") continues in this vein with more nods in the direction of flamenco although Bailey still looms large.

I can't locate an image for yet another Table of the Elements disc, this one "Nickel". It comes in a cloth sack with prints of the front and back of a US nickel on either side and was a promotional release from 1994 to thank various artists for their support of the label. One side is engraved with information including the admonishment not to pay for the record; it was intended to be given as a gift by whomever had copies (and that's how I got mine. Thanks, Keith!) The other side contains brief tracks by O'Rourke, Tony Conrad, Faust, Richard Youngs and Rowe. Still never absolutely sure which is which....here's the TOTE discography page https://jeffhunt.org/select-works-1/ 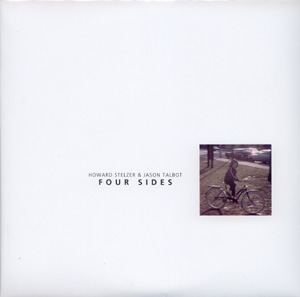 Lastly is the most recent thing, a double-45 set, of all things, by Howie Stelzer and Jason Talbot called "Four Sides". I fear this may have arrived during my time of turntablelessness, rendering me unable to pen a review. Too late now, I imagine, though the sides are chock full of crunchy yet discreet noise, turntable and tape machine abuse and generally high-spirited sonic malicious mischief, good unhealthy fun.

In closing, I'll note that the necessity of getting out of one's chair every couple of minutes to flip a piece of vinyl is a strong argument, as one ages, in favor of CDs. On the other hand, I have a strange hankering to hear the first piece of vinyl I ever owned, The Hollies' "Bus Stop". Damned good song.
Posted by Brian Olewnick at 12/01/2006 05:39:00 PM

I have about ten of those early ToTE 7"s, though I too haven't had anything to play them on for about a decade.

My copy of the Rowe disc includes (if i remember correctly) a locked groove at the end of one of the sides. I'm not sure if this is the same skip you mention, but pretty sure its there deliberately.

Thinking back, I don't remember playing the O'Rourke at 33 either! No wonder it sounded kinda morose! :)

I have a stack of old 7"s from my days listening to indie pop, including a load of old sarah Records releases that would probably sell for a fortune these days, and for some reason, a copy of Pinky and Perky's almighty rendition of "How ya gonna keep em' (down on the farm?)" Classic stuff.

I think that apart from those mentioned above the only other 7" I have that makes me think for more than a fleeting moment that I need a turntable is an old Otomo and Eye disc that came free with an early copy of the LMC's Resonance magazine that I don't think I have ever played.

Oh and Brian, The Hollies' Bus Stop is available right now from the iTunes Music store, all those boyhood memories packaged up into one neatly compressed parcel of zeroes and ones for just a dollar.... or is that not quite the same? :)

Not the same! I'm resolutely Luddite on both cell phones and iPods. They're tools of Satan, I tells ya.

I can understand that replacing a broken record player may not be everyone's first musical priority, but to be without one for ten years, while still having lots of stuff to play on one, strikes me as perverse.

When I got my latest system (admittedly a few years ago) the record player was the first component I considered. iPods schmiPods.