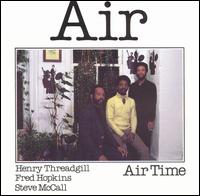 Along with the Art Ensemble, the quintessential AACM band for my money. Three absolute masters of their instruments, two no longer with us. All three moved to NYC in the mid-70s and became fixtures of the loft scene then. We used to joke about Hopkins, that he was a member of almost every band around; everybody wanted him. He was the first bassist I ever heard use a pick-up and not just so he could be heard over the rest of the band but so he could make audible a world of fascinating small sounds. I believe he was also the first I saw (doubtless, it had been done by a few bassists before) to utilize drumsticks on the bass, working complex, subtle rhythms on the strings, including beneath the bridge. Not a big guy, he wrapped himself around his instrument, vigorously attacking it. Both of these at Environ around '77. He was a delightful person as well, always up for a discussion.

'Air Time' is from November 1977 on the great, great Nessa label. Thanks,

Chuck! It opens with a gorgeous ballad by Steve McCall, "I'll Be Right Here Waiting", as moody and dark as anything Threadgill would come up with later. McCall was probably my favorite drummer from this period, incomparably musical (Roach-like in that respect) and a constant force beneath any group. Air made concrete the truism about "playing as a unit" more than any other band at the time, imho. Even with as imposing a figure as Threadgill on what would normally be considered the lead instruments, you really didn't ever get the effect of "The Henry Threadgill Trio"; his cohorts were every bit his equal.

Oh yeah, the hubkaphone just made its appearance on "G.v.E.", what a kick. I think I only saw them in operation once or twice (Threadgill didn't routinely carry them around). Once definitely at Jazzmania on E. 23rd St. and there I believe the proper name for the apparatus in play was "hubkawall": an array of 20-25 hubcaps played with mallets, on a rack leaning diaginally from floor to about eight feet in height. A truly wonderful sound--I haven't heard of them being used in a long, long time. Too bad as the music could use some of that sort of excitement. I imagine, these days, maybe only Roscoe Mitchell would have something approximating the hubkaphone in his arsenal. Ah yes, and there weren't many flute players who could touch Threadgill b 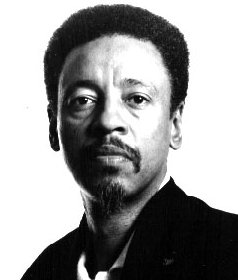 ack then. On Side Two, the spare, kabuki nature of "Subtraction" is the negative of the tidal force embodied in "Keep Right On Playing Thru the Mirror Over the Water".

Were I to engage in such things, I'm pretty sure this would appear among my Top Ten jazz albums of the 70s. Did I mention that Threadgill has one of the all-time greatest faces in jazz?
Posted by Brian Olewnick at 12/27/2006 04:17:00 PM