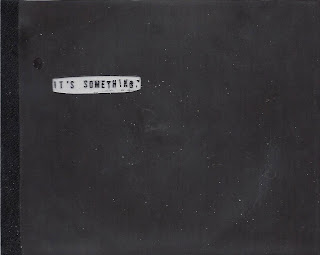 mites - it's something but it's not tomorrow (CDR)

Trying to quantify what it is about the music of Grisha Shakhnes (mites) that's so fundamentally appealing, I hit upon a number of things, to be sure, but foremost is usually the sense of commitment I get, of having a strong basic idea and seeing it through, for exactly the length of time it requires. Shakhnes uses field recordings pretty much but with such a deft hand and ear. As is often the case, print descriptions are pretty valueless; suffice it to say that he tends toward the grainy and sooty but with great depth and a wonderful knack for opposing and mixing textures. Every track in each disc is strong, all of them capable of being listened to and examined numerous times with new detail and structural relationships emerging on each occasion. Ont he Mystery Sea disc, they linger at mid-volume level save for the "climax", as it were, in the penultimate cut when the dynamics surge; it's a drama that feels well earned.

The CDr, which incidentally arrives in a magnetized rubber case, suitable for sticking up on your refrigerator, the shifts in loudness are more abrupt and differing sound sources appear, including bell-like tones. But even in the relatively plentiful variation, there's a unity about the pieces, a sense of purpose. There's also, as late int he second piece here, a wonderful naturalness in the sound, particularly, for me, the irregular rhythm heard when (it seems) something--a cord, perhaps?--is being wind-buffeted against a metal surface. Such a fine quasi-rhythm! The last, very quiet track is especially impressive, a fantastic series of low rumbles and tones of other sounds, pitched low, leading after 20 or so minutes to an Arabic voice (intoning a prayer) and a muffled female voice (not sure of the language) and a Western orchestra bled in alongside. It works beautifully. 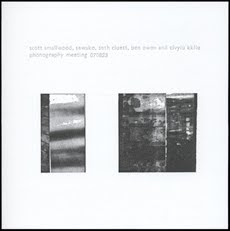 Five recordings as presented live at Issue Project Room in 2007, all based around field recordings, bleeding from one to the other. The creators provide "notes" for each, ranging from proper note to six photos (Owen) to a set of three and four letter words (Kkliu).

Smallwood's piece mixes more or less "traditional" sounds--wind, water, chimes, birds--but it has an appealing thickness to it, a density often missed in such works. It's in episodes, like a series of snapshots, drifting into a fine deep drone that ushers in a welter of urban sounds, a large, populated interior space. Actually, I'm never quite sure when one person's music ends and another begins. I'm thinking that the children partying are within Sawako's contribution, but who knows? Doesn't matter too much...It progresses through wooly buffeting with crunchy...footsteps? (perhaps Cluett's portion)...abstract crackles, indecipherable sounds (Owen?), very intense, like hyper-magnified quiet noises...a buzzing hum, very long held, a household device, perhaps, listened to from a fly's closeness. FIne journey, wish I'd been there.

Winds Measure also sent along two cassettes which, as I've mentioned, I'm only able to listen to in the car, not the ideal place for anything possessing a smidgen of delicacy which both of these recordings do. They each sounded interesting: Taku Unami/Stefan Thut on one and Unami with Angharad Davies on the other, but more than that I'd be reluctant to say. OK, there's clapping. But, hell, take a chance!

I think I must have missed Taku's collaboration with Theo Burt....

As soon as I see,'field recordings',I move on to the next review.'EAI' is becoming the new 'fusion';not much holds up_

as you may know--if you read that far in past reviews!--that's one of the things I ponder often given the prevalence of field recordings in much of the music that passes my way--how to qualitatively distinguish between sounds that, were I to hear them in situ, I'd probably be able to enjoy and those on discs that strike me as bland or not. Comes down to the choices made, I suppose. Some, like Grisha, have made choices I find exciting, delicious, etc. Others haven't.

I do think there's also something of a, for lack of a better term, technique-oriented reluctance on the part of many listeners to accept found sounds, enhanced or otherwise, as truly valid, this despite 58 or so years since 4'33". I think, for many, there's a real reluctance to deal with that (or a denial of its validity, which is fine as long as that's specified).

anyway, can't help being a bit touchy about being lumped with all the wishy washy crowd just cause i use field recordings (hmmm, sorry if that's a bit harsh :)). i play tapes, and it's a much more important aspect of my music for me, somehow - one can also can hear some Feldman and Grillo on the latter cdr, btw. plus, one really has to reason why field recordings are any worse than a distortion pedal. how you use it is what matters. generalizations, as usual, are stupid.