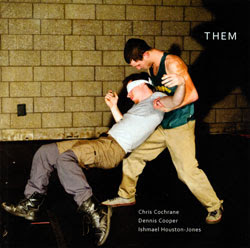 "Them" was initially conceived in 1985 by choreographer Ishmael Houston-Jones, write Dennis Cooper and guitarist Chris Cochrane as a work revolving around gay men and their lives, subsequently developed into a longer work the following year, becoming more overtly concerned with AIDS, dealing with the matter in a very direct, sometimes brutally harsh way. PS 122 produced a revival of the piece in 2010, which I had the good fortune to attend. It was a very moving experience, Houston-Jones' controlled but ferocious choreography, Cooper's intimate, unsparing, often achingly romantic spoken texts and Cochrane's guitar and tape contributions, ranging from noise to gorgeous songs all melded finely, framing the vignettes drawn from everyday life in the (ongoing) era of AIDS. A sequence toward the end where the young male dancers, one by one, went through the quiet motions of palpating jaws and armpits in front of an unseen mirror, searching for enlarged lymph nodes, was one of the saddest, most wrenching things I've seen.

Happily, Tzadik has released a disc which, though you have to imagine the dance, does a pretty good job of filling in the rest though, if the production continues to be staged (and I believe there were plans to do so), I'd urge people to go and experience the totality. Here, the music is provided by Cochrane (guitars, percussion, bass, accordion, keyboards, tapes) accompanied by Kato Hideki (bass, percussion, keyboards, mandolin), wrapping itself around several spoken texts by Cooper (with one by Jeremy Pheiffer). In my previous exposure to Cochrane's work, I've been most attracted by his song forms which are solid and almost traditionally beautiful but with enough warpage and weft to transfix and that's often the case here, as on the utterly lovely "Ish solo". But he also proves adept at more ambient noise pieces ("Pre-Show") and ones that seem to draw inspiration from electric Miles. Still, as enjoyable as the music is, you have to listen to it, I think, as a kind of obbligato to the texts, delivered in a calm but intensely nostalgic voice by Cooper. They largely involve memories--first loves, old boyfriends, traumatic events, the peaks and valleys of growing up gay in the 60s and 70s, the drugs and sex, the suicides. All coming to the fore now that, in 1986, so many were dying.

The booklet includes several photographs from the production, giving the listener at least a small idea of the physicality of Houston-Jones' contributions--robust, male, youthful vitality and explosiveness is pervasive in the piece, making the node-searching episode all the more heartrending.

In all, a fine disc and, short of a well-filmed DVD, as close as you'll get to "Them" without seeing it. But if it shows up in your neck of the woods, do yourselves a favor and go.