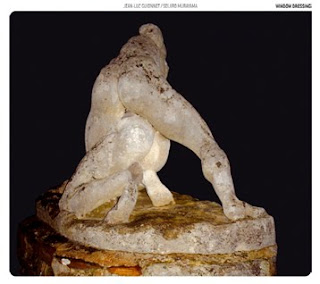 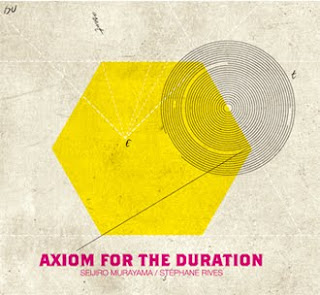 Two duo recordings from Potlatch, each featuring Murayama with a saxophonist, Guionnet on one, Rives the other, both thorny and intriguing affairs.

Guionnet has made something of a habit of skirting categorical boundaries, as likely to engage in pipe organ drones as free jazz extravaganzas as eai as Chamy-ized performance. Here, he and Murayama seek to wring more out of what I hear as the nether reaches of efi, kind of the area you may have expected Butcher and Prevost to explore a decade or so ago, This isn't to cast it as a recherche event; I get the feeling Guionnet is very conscious of this "re-mining" of certain approaches and I choose to listen to it that way, allowing more latitude than I otherwise might, always acknowledging that there may still be lodes hitherto unexposed. Not that I'm often sold on the venture. When Guionnet erupts in plosives, guttural, Mitchell-esque drones or a flurry of squeaks, it's next to impossible not to hear their lineage. On the other hand, the placement of these sounds within the generally gentle framework provided by Murayama (often using brushes or the like) can be quite attractive and thoughtful, setting up a certain tension in this listener's head that alternates between aggravating (in the sense of wondering why they bother) and itchily delicious when, on their own terms, they succeed. Is it too easy to say, "Ah, here's the Evan Parker section."? I don't know, I'm sure Guionnet has other thing son his mind but there no way anyone doesn't register Parker from time to time (or Butcher elsewhere). Murayama as well, though perhaps less overtly, operates out of a similar context; I find his contributions less problematic but maybe I'm over-reaching when I think I pick up references to Butoh at the conclusion of the first 30 minute plus track, isolated strikes sounds that are very moving.

The second track concentrates on rushing air sounds from Guionnet, brushed ones from Murayama, a bit more into early century eai (! :-) ) but with a undertone, to these ears, of free jazz; it's not too hard to imagine Roscoe Mitchell getting to this point. Again, not a deep criticism, just curious about the whys involved. More, harsher airborne rasps in the third then back to a more "traditional" interplay for the final cut, Murayama again peppering the affair with lovely, heavy blows mixed with whooshing scrapes. As before, I hem and haw; it's very well played, well imagined. Had it been on a Butcher solo outing from 2002, I would have been wowed. Should I still be so? Not sure...in any case, listeners without my qualms should find much to enjoy.

The recording with Rives is a rather different animal. Rives, on soprano, uses what I presume to be a circular breathing technique but manages to do so with nary a trace of the inhale/exhale one normally hears, producing, in that sense, a very pure drone, although internally braided in a complex manner. Murayama bows low-pitched metal in a sawing fashion, supplying that missing pulse. It's piercing, not a little grating and extremely focused, not dissimilar from prior Rives work as far as that goes. The tones set one's inner ear abuzz, drive the dog nuts and generally upset the neighbors. It's wonderful. The second section, some 20 minutes in, tones things down a hair, Rives' sounds threading through the continued (though softer) bowing of Murayama, creating a music that hints at raga, particularly the alap portions. Interestingly, though perhaps only because I've recently played it myself, I was also reminded of the quavering strings heard in Ornette's "Silence" from the 1962 Town Hall recording. Rives soon migrates to purer tones as well, even as the metal becomes more diffuse, a lovely effect. This, in turn, transforms into ultra-high ringing--I'm not sure if Rives is in there or not, actually, but I'm guessing he is--splattered with the odd crash of metal. The final track (it's one piece, just subdivided into cuts) subtly combines these approaches, retaining the soprano drone but splintering it a bit, still keeping the disc's overall consistency, something I appreciate hugely. It densifies, entwines, shudders, grows steadily more complex, meatier. Ends.

Thanks Brian for this review!
About JLG, I can understand the connection with Roscoe Mitchell, but a bit less with EP or JB.
For me, his duo with Seijiro has mainly to see with the treatment of silence in improvisation and the resulting tension.
That's what I felt when seeing them so many times performing live. I hope it can take shape in this recording.