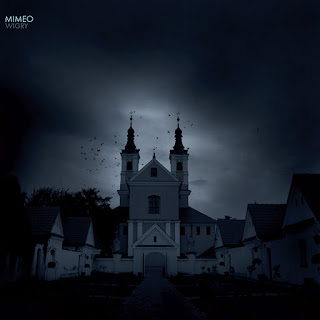 I love LPs, Still. Admittedly, however, I'd have preferred this to have been issued on CD, or two CDs. The massiveness, the organic quality of the music contained herein benefits from as few interruptions as possible. An amazing set.

Performed in the cathedral at Wigry, Poland in November of 2009, in the freezing cold. Looking at a map, I see the structure is positioned on a promontory that extends into a large lake and, from the dark cover photo, looks to be quite beautiful.

It's a powerful performance but one, largely due to its amorphous character and sheer density is really tough to describe. MIMEO had been in existence a dozen or so years at the time of the recording and had, one hopes, long since reined in the natural danger of overdoing re: the immense firepower at its disposal. It doesn't seem that, as is often the case in a MIMEO event (how many shows have there been in total? A dozen?) that there was any guiding plan put forward by one member, as was the case with The Hands of Caravaggio (Rowe) or the concert at the Serpentine (Matthews). Instead we hear, apparently, a pure improvisation. One can say that, loosely speaking, it progresses from quieter, (relatively) calmer areas near the beginning, surges forward to a mini-climax or two and, for much or Side D, just tears the roof off, causing the marbleized saints to grimace in fear, the stained glass to melt.

There's something marvelous in that barely contained power, the more so because it's been delayed, subdued, for an hour or so. Very tempting to describe the affair in sexual terms, though not solo, instead with ten participants managing to reach orgasmic synchrony as a single vibrating, shimmering organism.

:-) Too much? Too Keenan? Dunno, it reaches places like that, really an astonishing album. I kind of wish I didn't have to flip over the vinyl an extra couple of times, and sure, there's some meandering moments but if you have a turntable, this one is about as mandatory as it gets.

Available in the US from erst dist 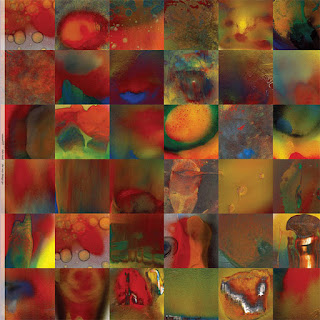 Hey, whaddya know? Another double LP! Also electronic in nature, though solo and, I daresay Reed wouldn't be out of place as a member of MIMEO. His music is resolutely smooth (in a good way) and spreads itself out like a syrup.

I find it oddly hard to offer much in the way of descriptors. The six pieces are fairly steady state, drone-y, if you like, though exceedingly rich and varying substantially within the initial parameters. There's a fundamental tonality to them, yet they bristle. I think it's fair to detect Rowe's influence (Reed, of course, plays with Rowe and Michael Haleta in the Voltage Spooks trio) and at times I think of the music here as akin to what you might get if you took some of the similarly (relatively) unabrasive passages of Rowe's work, especially that from around 2004, and stretched it out, by doing so making more apparent the detail nestled within.

At its best--for me, "in a hazy field of gray and green" and "the way things go (for c.h.) here--Reed attains a kind of granular ethereality that I find singularly captivating. He doesn't get nearly as much notice as he deserves. Check it out.

Haw to get in touch with you Brian? My mail: maciej.nowotny@gmail.com