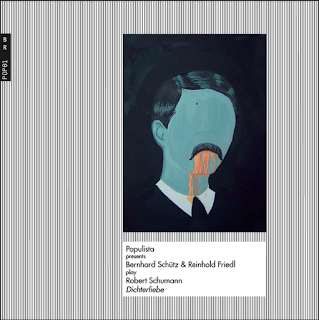 I should say up front that, although I've heard Dichterliebe on any number of occasions in the past on radio, I'm not very conversant with it nor do I know it intimately. When I've heard it, I'm sure most of the time it was the Dietrich Fischer-Dieskau/Vladimir Horowitz rendition. So if I may assume that's the benchmark for this piece, it's clear that Bernhard Schütz (voice) and Reinhold Friedl (piano) have chosen to interpret the (exceedingly beautiful) songs in a manner much more reminiscent of Brecht/Weill and, to these ears, it's a perfect choice. If you know any of the songs at all, it's likely the first one, "Im wunderschönen Monat Mai", with its heartrendingly gorgeous melody and wrenching sense of a missing line. Well, it's the showstopper here too, with Schütz (who is known as an actor in Germany, though I've no idea if he's previously lent his talents to a musical venture) delivering the words in a breathy, burred voice that only just makes it to the end of the line, a stirring effect as the final syllables are gasped. Friedl also elasticizes the music, injecting some Satie and even Feldman into the rolling phrases, allowing them to linger for split seconds before continuing the cascade. Absolutely beautiful. If that's the high point, there are several other fantastic performances among the sixteen lieder, some quite raucous (shouted vocals here and there), others intensely brooding.

Can't recommend this one highly enough. 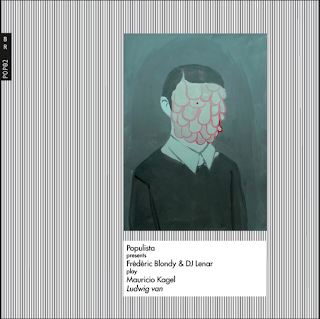 Ashamedly, I'm not so familiar with Kagel's "Ludwig van" either though, again, I've heard it now and again over the years. But I'm much less able to evaluate the performance by Frédéric Blondy (piano) and DJ Lenar (turntables) in relation to its original status. Actually, the piece was initially a filmwork, done for the bicentennial of Beethoven's birth (1978) in which the interior of his studio was
covered with pages of scores from his work. A piano would play the music as it entered the view of the camera plus there were TV and radio programs on the composer jostling for aural space. You get something of that here as recognizable scraps of Beethoveniana surface and subside amidst other noise and spun and scratched recordings.

As a piece of music, the collage technique feels a bit dated, perhaps inevitably though, given that, the recording more than sustains interest. Blondy's playing (I'm assuming the piano is predominantly Blondy throughout, not pre-existing recordings) is both sensitive and strong. When actually spinning the vinyl, the effect by DJ Lenar is, I guess, appropriately nostalgic. What holds the work together, not surprisingly, is the actual substance of Beethoven's music, containing enough power and beauty to transcend the perturbations and attempts at warpage.

Good recording, need to check out the original.... 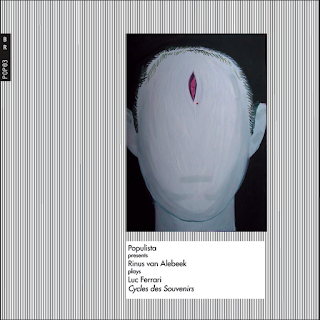 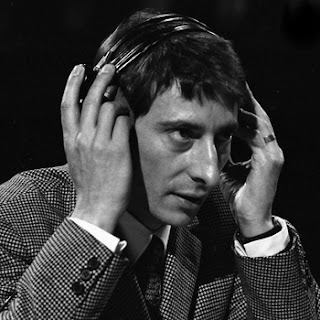 OK, this is a little confusing.

The Mathka release, per its liners, was recorded October 28, 2010, the Bôłt the next day, both in Montreuil, France. The first was explicitly at the home of Ferrari, in the presence of his wife, Brunhild. The second doesn't say anything about the location to that degree of specificity; I've no *real* idea if it was recorded in the same situation though it would seem to be odd to do it elsewhere on the next day if you're in the same town.

At first, despite the apparent date difference, I wasn't sure if I didn't have two copies of the same recording, but the Bôłt clocks in at 72:30, the Mathka at 66:41 so, assuming no editing, I take it they're different. It's tough to tell without playing them side by side (which I've not done...perhaps I will; or someone can set me straight) since the original Ferrari piece, "Cycle des Souvenirs", is played throughout on both. That's the conceit here, incidentally: van Alebeek "simply" inserts a disc of the Ferrari into a system, at his home (possibly elsewhere), and walks about the environment, mic in hand, recording the ambiance with the original piece suffusing the space. It's a wonderful idea, in my opinion, and works brilliantly.

Why this works so well is tough to say except for the underlying premise that the nature of Ferrari's music clearly lends itself to thoughtful and sensitive integration with existing environments. All credit to van Alebeek for judicious mixing and editing, in both releases, for creating a flow that seems entirely rich and natural. The piece, voices, the sounds of the room, Mme. Ferrari, in at least one of the versions, reading quietly; it all blends with the "Cycle" as though it had always been there. If I have to choose, there's something a bit clearer and shimmering in the Mathka recording, but both are very much worth hearing.