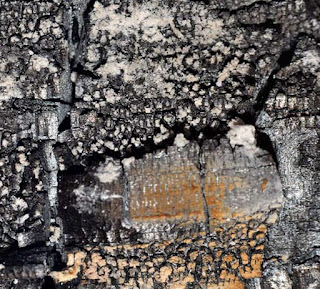 Ah, so satisfying. I remember stumbling across an unusually well-written review of "The Hands of Caravaggio" back when, by a young 'un somewhere out in Ohio, impressive enough that I wrote him and complimented his work. Well, he's done a good bit since then, both written and aural but "Clearing, Polluted" is a real high water mark.

Descriptives here are going to be a bit of a problem as I think it'll be tough to do justice to how this actually sounds. Jesse did a fine job; consult him as well. All electronics, yes, and one gets the impression that the devices are fairly lo-fi in nature.It begins quite harshly with blistered sounds; in truth, I was anticipating something along these lines. But Panzner very quickly moves into subtler areas--not routine quiet patches but mysterious stretches with soft but disturbing stria wafting over the surface, interrupted here and there by what seem to be brushes on drums. That gaseous sound becomes more and more embodied, revealing a startling richness and, eventually, an organ-like beauty. This tumbles into the second track which again, begins in scattered, abrupt fashion, a burble of bumps, hisses, gurgles and crackles. It then explodes into a fine cacophony, the most raucous portion of the disc, but music that somehow seems expertly reined, bucking but not swirling off into a muddy morass, hypersensitive to detail and sonic weight. This too coalesces into a surprising form some seven minutes in, a kind of grinding, chiming mass that contains the feel of something rockish--like the best moments of Branca, only much better. Seriously strong stuff.

But the last track, the excellently titled, "Less Than a Feeling", is perhaps the most fully realized, solid piece. Again the detail combined with the billowy structure utterly wins me over. It's as though you're hearing sounds from inside the mantle of the Earth, miles below the surface, deep and resonant like you'd expect but with needle-thin, unexpected sparks flying. Soon, other sounds make themselves felt, many, each inserted with fine grace and timing before ending, perfectly, with a grating plug pull that brings us, nearly full circle, back to the beginning.

Great recording, do check it out.