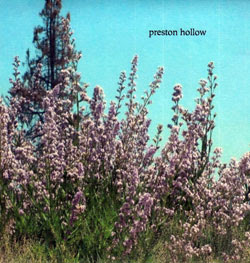 As Richard mentioned a couple of weeks back, this is a collaboration at a distance, Guthrie having recorded her fine, often plaintive French horn in an apparent avian paradise named Preston Hollow with Chabala adding his thoughts, on e-bow guitar, at a later date. Both elements work extremely well, Guthrie's ruminations unforced and open to the environment--one imagines she may have entirely forgotten that she was recording the vent--Chabala's commentary considered and complimentary. It proceeds from a relatively fractured onset, Guthrie playing clearly but not throughout (the birds take that roll), the guitar entering now and then. But about midway through, Chabala sets a lovely, multi-tiered drone in motion, something that risks being overbearing but, to my ears, enhances the existing music in a lovely manner that moves the entirety of the work into an adjacent, perhaps surprising space, unifying all three elements. Toward the end, Guthrie adds a series of marvelously "human" notes, wistful, self-questioning, even vaguely imitative of the flies we've heard buzzing about, maybe trying to sublimate into the environment. Very beautiful, whatever the rationale (if any) and a really fine achievement for both musicians (and the birds). 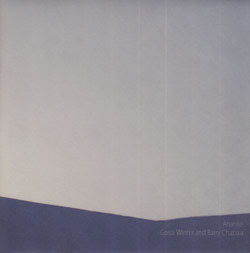 A slightly longer range collaboration, spanning Australia and New Jersey. Seven brief songs (about 25 minutes) and they *are* pretty much songs. Winter has a pleasantly raspy voice and (happily) eschews extreme techniques, instead drawing from folk forms and blues in a generally heartfelt and honest fashion. In the first song, her accompaniment is struck matches and a faucet, lending a fine atmosphere to the elegiac tones. If anything, I feel some affinity for the Canterbury scene, though drastically pared down. Chabala's guitar (not e-bowed) is clear and bell-like, reminding me a bit of, say, Brian Godding (!) while Winter, especially in pieces like "I Shadowed Share You" evokes Julie Tippetts not a little bit. I was a bit skeptical on first hearing, but repeated listens largely won me over (ok, I still have problems with "Nmbrs"...). Interesting alleyway for Chabala, curious to hear if he pursues it, and nice to hear Winter for the first time. (Is "And Frightened Not" a standard from somewhere--sounds like it should be...) 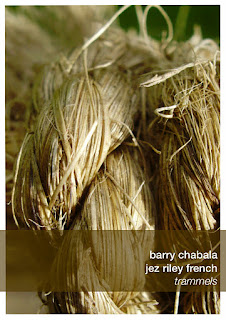 And, to complete the set, yet another album with an ocean between the participants. Three photographic scores among the four works, two of which provided on an accompanying postcard and, perhaps, the cover is the third? "bruxelles score #3" is a serene affair, placing soft city recordings athwart gentle, chiming guitar tones; not earthshaking but nice, like a warm bath. The score for "for ivan and anna" is very attractive, a blurred, horizontal photo of greenery atop four differently widthed slivers of similar subject, ranging from red/yellow to green/lilac. The music is eerie, soft, e-bowed (?) howls among ultra-low rumbles (wind?), interspersed with hisses and other ephemera. Strong, moody piece.

"(....) a coda" is quiet, really quiet. Four or so minutes in, I pick up some faint sounds, then a soft but clearly audible e-bow swelling. Subsides back into the barely heard. Nice idea, well realized. Again, nothing particularly groundbreaking but accomplished with grace; that's good enough. The title track is probably the most active, Chabala playing sparely but freely, using what sounds like a Roweian handheld fan at one point, French creating echo-y, indistinct sounds beneath. Again, a fine bed of sound, a low level murmur of goings on that are both varied and vaguely forward-thrusting.

thanks for listening Brian, glad you liked it all. there are no standards anywhere to be found!