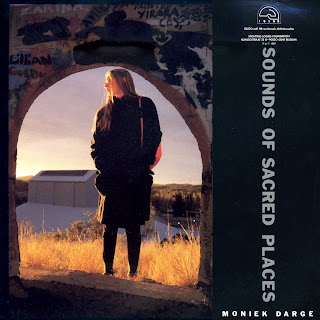 Five pieces recorded at various public sites between 1984 and 1987. My favorite is the opening track, "Turkish Square", actually recorded in Ghent at a site of the same name, incorporating, among other things, an "n-dimensional" oscillating system built by Darge's partner, Godfried-Willem Raes. This system generates rich, thick tones that sound as though they might vibrate any metal in the vicinity (reminds me a bit of those produced by Max Neuhaus' Times Square installation) which are enjoyable enough, but are only enhanced by the sounds of kids cavorting, whistles, voices call for "Yusef", a woman speaking rapidly, quietly, over a threatening rumble. A fine piece. The remaining four tracks are all enjoyable if, to these ears, a bit less so. In "Abbey-Sounds", several people, in several languages, narrate their thoughts about the space over recordings of doves that occupy the roof and other quasi-avian sounds. "Rain" is just that, accompanied by the strangled utterances (or Darge, I take it), recorded via a mic right alongside her larynx. It's disturbing and uncomfortable, bother me a bit, not necessarily in a good way. David Moss is one of the voices on the preceding track and the voice here annoyingly reminds me a bit of his. The last two pieces utilize a bell, apparently this one, the first in a muffled and fairly steady series of strikes in which the initial attack has been processed out (fascinating sound!) the last in a slow set of strikes where overtones overlap, a little woozy, perhaps, but easily capable of being luxuriated in. 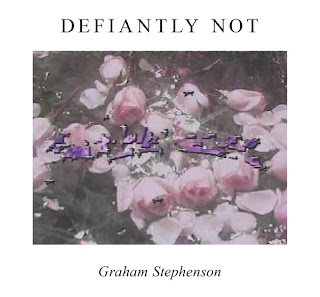 As with Unami, but for different reasons, I'm kinda glad I heard Stephenson in several contexts at AMPLIFY:stones before I heard his solo disc (trumpet, microphone and, um, audacity). I generally found him the most rewarding member of the ensembles in which he appeared, largely for the concentrated quality he brought and the remarkable amount of variation within an (only) apparently narrow range.

So when the first track begins with eight or so minutes of seriously painful, shenai-like shrieking, a strangulated trumpet if ever there was one, in the back of my mind there's the assurance that this will somehow fit into a context. And it sort of does, if only as one color (if you will) among several, no greater weight attached to the stridency than to the quiet later on. Relative quiet, that is, as the aforementioned microphone seems to come into play, sliding about brassy surfaces. Or the trumpet sliding around the mic whilst emitting gases. Odd digital beeps, too. You begin to get a real sense of the visceral in this first piece; it's exhausting and invigorating. A lot of ground is covered but with not the slightest sense of meandering.

The second track pits a fairly pure, though reedy sounding, high tone against background scrabbling, all embraced by an audible room hum and the occasional voice. Very casual, in a way, but subtly moving, the central tone difficult to not hear as a keen of some kind, abraded by harsher, scouring wind sounds. Good stuff. The final cut begins softly enough, all breath and muted rumblings but midway through, while the ind still howls (Stephenson-generated?) and car horns honk outside, it sounds like the trumpet hasn't forgotten its earlier abuse at the, erm, hands of the microphone and engages it in battle. Not sure who won, but burbling quasi-serenity returns, several minutes of percussive sounds, a quick onrush of traffic, then silence. 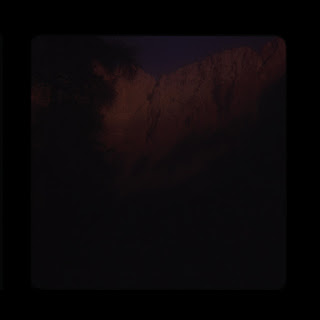 Among NYC denizens that deal with this end of the music spectrum, Gomberg's solo work stands rather apart. It's resolutely gentle and more or less tonal, harkening to Fennesz as much as anyone else (although sonorities of Terry Riley creep in as well), most rougher elements swaddled in ringing synth tones and billowing organ-y swells. I like it pretty well both for the sheer aural delight, which is considerable, but more for the subtle twists and turns it tends to take--nothing dramatic, it simply often ends up a few steps removed from where you thought it was going. Rough, burred edges often intrude on the lushness, faint rhythmic elements appear--wooden knocks here, slow, slow throbs there. There's often enough a tinge of sourness as well, most clearly in the final piece, that tempers what might be an overly cloying smoothness.

It's not overwhelming by any means but doesn't make any pretense of being so. It's quite ingratiating and a certain pleasure to simply languish in, which I enjoy doing very much. This back to back with the Stephenson above is quite a nice yin/yang.