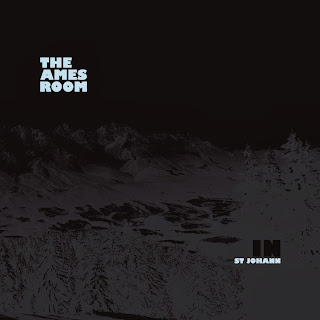 The day I arrived in Paris, in February of 2013, Jacques Oger called to welcome me and let me know that The Ames Room was performing the following evening in the cave of a restaurant near the center of town. This was my first chance to catch them live, after hearing and enjoying several albums. There were two sets, with intriguing differences. In the first, their approach seemed to become clear to me, at least on this occasion if not always: Each member of the trio (Jean-Luc Guionnet on alto, Clayton Thomas on bass and Will Guthrie on drums) would improvise a short sequence, say between two and ten notes then repeat the phrase over and over, virtually hammering it into the ground before moving to the next. The duration of these iterations would vary at the whim of the musician. The result was a fascinating kind of subtle brutalism, the naked aggression of the sounds (they were routinely loud, fast and rough) offset, to my ears anyway, by the shimmering shifts of relationships both within a given, brief time bracket and over a longer stretch as new phrases entered. It's the kind of approach you might be more likely to hear with more delicate elements, emphasizing the transparency and laminal effects. Not here. Guionnet especially imbued each phrase with a ferociously hard-edged burr. I enjoyed it greatly but, at the same time, found myself wondering if this idea )if such it was) was enough to sustain an ensemble for more than an album or a set. When they returned for the second half of the show, to my surprise and pleasure, they seemed to begin where they'd left off and move outwards, retaining the ferocity but somehow loosening the rigorous constraints of the fractured, short phrasing and allowing the music to unfurl a good bit, as though this hard-edged trio had just heard "Ascension". A strong, thrilling set indeed.

I have no real idea how typical that evening was or if it was simply one out of many approaches the trio put into play. This recording is from March, 2012, about a year before the concert in Paris and consists of one 40-minute slab o' juddering force. The repetitive aspect, while clearly present, is less obsessive than was the case in my concert experience. Guthrie sets off with a tremendously awkward figure, lurching and stumbling but knowing precisely what he's doing, generating a great staircase-fall cadence. Thomas, who often struck me as Favors-like, if so here, with a similarly "brutal" approach, dark, booming and resolutely non-pyrotechnic while Guionnet generates tight, harsh clusters of notes, separate kernels, exploding/oozing. They do seem to slide in and out of the attack I described above but with great fluidity, apparently not wedded to a given strategy. It's an odd thing. I vacillate between hearing the "moment" wherein the trio sounds more or less like a pretty good free jazz trio, not exactly my area of interest these days, albeit one with an incredible drummer (his stop/starts are always great fun), and standing back and trying to get a handle on the overall form, when things become more absorbing. Granted, this may be exactly the opposite to most folks' reactions, but there you go. It's exhausting but I gather that's one of the points--no let-up but also no real overindulgence, though some may disagree with that assessment. I hear it as a kind of block of compressed sound and in some ways relate it to Guthrie's work from several years ago, like "Spear" and, well, "Building Blocks". Part of me is curious to have known what would be the experience of hearing this trio time after time, over a long stretch. I'd feel pretty battered, I'm sure, but I wonder if I'd develop a better appreciation for the range of ideas. From what I understand, Thomas is moving back to his native Australia so there might not be many Ames Room albums in the future. In the meantime, as I've said before, if you want to term this music "free jazz", I'm not sure there's a stronger ensemble around. If you don't, it's still a major kick in the ass.