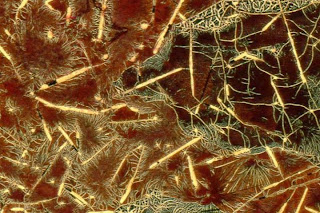 Looking back, I see it's only been about seven years since, via the recordings issued on Manual, I first became aware of the improvising scene in Seoul; seems like longer, maybe I'm forgetting something. But the musicians involved were clearly up to something new and exciting, carving out a distinct area that often involved repurposed electronics, possibly in various states of disrepair, extending and substantially reinvigorating the broken electronics work of Voice Crack, etc., but dispensing with any pulse framework and ranging far beyond that kind of work, eventually encompassing small motorized objects, typewriters and more. Some of it could be quite extreme in terms of the noise quotient and I found, in turn, that my own reactions would vary a good bit from absorption to skepticism, but I've always been very intrigued to hear more (I've never been in the position to see any of the musicians in a live setting, unfortunately).

On "Objets Infernaux", no instrumentation is given but the general environment is more or less consistent with what I've heard before though the one thing that stands out, for me, is an increased thickness, a partial consequence of the pretty much unrelenting aspect of the performance. Five tracks, most of which are quite full and active, writhing with sizzles, glitches, iterative cycles (like that derived from the interiors of computerized machines), needle-sharp whines and more. The excellent cover images, by Lee Hangjun, actually do a fine job of conveying the nature of the sounds within--hot, infested and uncomfortable. On the first several listens, this onslaught proved problematic for me. The fourth cut excepted, I could hear much of it as--if I "disregarded" the specific sound sources--as essentially a solid enough improv session, somewhat overactive to my taste, ok but not thrilling. That fourth cut, though, with its relatively more expansive sense of space, kind of acted as a kernel, a beginning point, to hear outward before and after its occurrence and helped elucidate the rest of it substantially, establish something of an overall form. Entirely unfairly, I happened, while spending a few days with this disc, to listen to David Tudor's extraordinary recording of Cage's "Variations II", in which the furious torrent of sound is at the service of a through-going idea that gives the work a seething life. Not that I expect many other recordings to live up to that standard, but something of a pervasive idea would go a long way toward lifting sessions like this one from a good, wiry, cantankerous improv outing to something "more". I hope I'm not overlay harsh here because "Objets Infernaux" is a very good recording, just that in my head, musicians like Hong Chulki and Ryu Hankil are capable of upping things a few notches and I look forward to hearing that. And, to my ears, the depth achieved in that fourth cut gives an indication that my own, perhaps idiosyncratic desires will one day be attained. :-)

In the meantime, enjoy it for what (at the least) it is: a molten, scalding stream of sound.