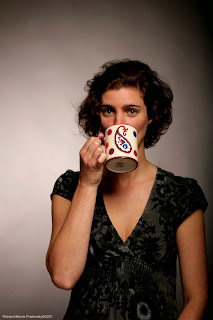 (Aside from the fact that the cover is in line with all of the other Confront metal-box cases, the images I located on-line were all in some non-.jpg format and wouldn't load here. Hence the above photo instead which, anyway, is pretty nice.)

For her first solo recording, Davies chooses not to present improvisations or realizations of composed pieces but, very openly, a set of studies for violin, each titled with reference to the specific activity involved, each concentrating on one (complex) exercise, one of them with three variations. This can present a challenge for the listener more normally attuned to improv or composition. To the extent one hopes for, say, transcendence of some kind, here I think of it more as a kind of anatomy lesson, that these explorations are parts of the violin.

One of the immediately apparent aspects of the music is the amount of layers in play, often two or three distinct sound areas generated by one (complex) action that, though in fact related, sometimes sound as though issuing form two or more distinct voices. On the opening track, "circular bowing study", the rapid rhythm, insistent but never quite precise, apposes brief, guttural groans with wispy, rosiny scrapes, low and high, the phasing seeming to be somehow different though obviously made with the same sweep of the arm. As with all the pieces, Davies does "one thing" throughout; the fascination develops as the listener delves into everything that's occurring, much of which isn't apparent at first blush. "balancing spring on strings", in three versions, presumably involves just that. I seem to hear a bit of a metallic tinge in the opening, strong plucks, less when the dense harmonic bowing ensues. I should say at this point that listeners for whom the sound of harmonically played violin is the source of extreme distress will find this extra tough going. I have a bit of that feeling latent and need to consciously shift into a "pure sound" frame of mind, something I should be doing anyway of course, and all is well. Again, multiple layers are in effect, often one or two more than are obvious at first; I recommend playing at a decent volume to really appreciate all that's going on--the third variation enters especially wonderful, complicated areas. (I should also mention Sebastian Lexer's excellent recording, including the room, the sounds of which linger between tracks--found myself wondering if these were all recorded in one continuous take.)

"tremolo & plastic peg study" consists of quiet, rapid strokes, more material than tonal, that begin to wildly fluctuate in volume and bow pressure, maintaining the quick pace, again shifting across several discrete sound areas form low graininess to ultra-high whistling. There's a fine obsessiveness in play here, as though Davies is scouring the far corners of her instrument, making sure every possible crumb of sound is located. A single rich pluck begins "pizz, nail file & fingers study", followed by a stronger one and then, I'm guessing, the nail file. A similarly structured section follows, very stark, almost bitter, sort of a Beckettian atmosphere. In this piece, I do have a sense of Davies' having pushed things beyond the sound-fascination stage into something quite poignant and beautiful.

A fine recording, enjoyable on many levels. Here's hoping there are more to come.