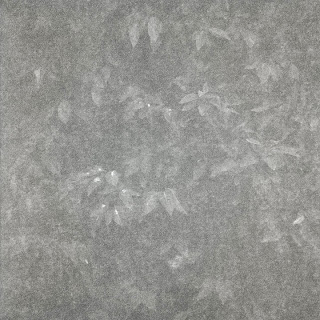 An ongoing question I've raised, here and to myself, is with regard to the evaluation of field recordings, specifically why I enjoy this one but not that one. It's perplexing and difficult, for me, to quantify. A similar quandary can arise with the area of music produced here by Romanelli, which I enjoy quite a bit: dreamy, electronic clouds carrying something of an organ-y quality that waft along with no rhythmic reference or apparent structure. There will be many cases where I'm almost immediately bored but once in a while, I'm just as immediately captivated, as is the case here. I'm pretty certain it has something to do with perceived depth of field which, in this instance, is interesting as the layers seem to be composed of elements without very high degrees of contrast (no rough rumblings under smooth surfaces, for example) but instead there seem to be multiple strands that are constricted into a reasonably narrow spectrum. Yet it works.

Three pieces that segue imperceptibly into one another, performed live in September 2013, apparently Romanelli's initial venture into live performance after having been a part of the duo Tu m' since 1998. The music is the result of a computer program he designed which is "able to generate live 110889 sound events" of which we hear numbers 148, 149 and 150. A pulse of sorts manifests on occasion, more a circular kind of sound, as though you're hearing a reduced recording of a ball bearing rotating around the interior of a metal bowl. Somehow, the kind of fluff you expect never appears; the music manages to attain a kind of hard edge despite the diffusion and "glow". There's something oddly ruthless about it. Romanelli quotes Picabia, "The future is a monotonous instrument." and something about that quotation resonates strongly. Perhaps it's that, beneath all the seeming lushness there's also a sense of bleakness. Whatever the case, it's very much worth your while.

Excellently mastered by Giuseppe Ielasi and contained in a finely designed package by Ben Owen. 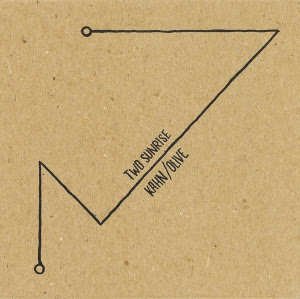 It's funny how perceptions linger. Having heard any number of Jason Kahn recordings from early in the oughts (and seen him in performance), I still retain this dumb preconception when I see his name on a release, that it will contain some precision, even obsessive rhythmic motifs, despite the fact that the last few occasions I've encountered his work, this hasn't been the case. Tim Olive's name, of course, suggests nothing of the sort and this recording, documenting their first meeting in 2012, is redolent of the rough-hewn, splatter electronics I've known in Olive's work while at the same time somehow evoking a shattered version of Kahn's percussion music (though both here are on electronics, Olive also using a magnetic pick-up). The result is a harsh, dense and spiky ride through territory adjacent to that plowed by the fine Seoul crew but, generally, gummier, more chewy, the sounds more strand-like than prickly. Percussion is evoked as well as a range of sounds that recall strings of various kinds, gut to metal. There are a handful of relatively calm moments, but the thrust is toward the torrential, most of the elements pushing the music forward, elbowing it, even. Good, tough work, not for the faint-hearted. 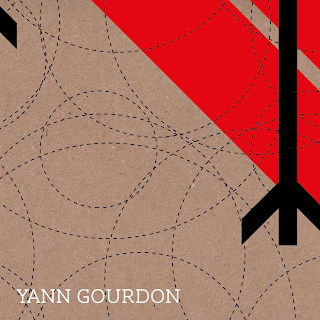 As the label's name implies, we're deep in drone territory here. I know nothing of Gourdon and little info is provided with the disc. What I can discern from the net as well as what my ears tell me is that Gourdon in some manner uses a hurdy-gurdy, though I take it processed to an extreme degree. It's one thing the whole way through, a veritable foie gras of a drone, layered to an almost obscene level of richness, all sorts of flavors swirling around, the overall texture silky smooth. After a while, you begin to pick out (or imagine) quasi-melodies buried in the mix but the music is so densely packed, it's hard to follow a given thread for any length of time. Though it uses nothing like the same sound-set, I'm somehow reminded of that classic of ambiance, Laraaji's "Day of Radiance". This goes on for a good 40 minutes at which point the listener will likely be either totally aggravated or luxuriating in the bath. Me, I'm somewhere in between; it's enjoyable enough but I felt I'd gleaned what there is to be absorbed halfway through and was searching for deeper levels. Very attractive of its kind, though.