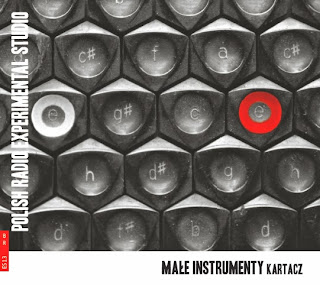 Małe Instrumenty translates to "small instruments" and is the name of this quintet made up of Paweł Romańczuk, Marcin Ożóg, Tomasz Orszulak, Jędrek Kuziela and Maciek Bączyk, all working in the "toy music" realm. The disc consists of one short work by the composer Włodzimierz Kotoński and six pieces by Romańczuk.

Kotoński's "Study for One Cymbal Stroke" (1959) sounds like nothing of the kind, instead a whimsical, three-minute exploration of a string of curious, even humorous sounds: whistles, whangs, tinkles, blurts and such from various sources. Very charming and setting the stage for the works that follow. As with the older composition, there's much use of disparate sound sources; indeed, each piece is like a mini-handbook for a range of them. For me, there's a balance between the sheer, sensual enjoyment of these sounds (which is significant) and their kind of episodic presentation, tending toward a string of elements, overlapping here and there, but less a "composition" than a series. Sometimes this works quite well (the title track, which means "a canister shot", with its vocal interjections is one example, creating a bit of a cartoon effect that's quite delicious), other times it feels less substantial. "Inops Ventilex", with its wonderful swells from one or more accordions (plus, I think, some cheap keyboards, maybe Casios, imitating accordions) stands a bit apart, both powerful and wryly humorous, a very strong piece as is the closing "SiToPhony", with dark pulses that, while still referring to the comic, edges toward the macabre. At the end of things, a bit hit and miss but more of the former than the latter and worth hearing. 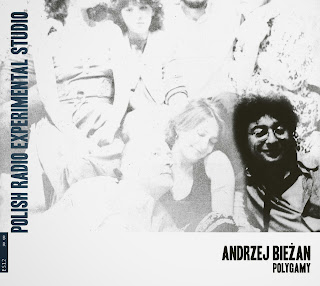 Bieżan (1945-1983) was a Polish pianist and composer who worked in jazz, avant-classical and theater music, inventing instruments and playing unusual ones (like the marine trumpet). Seven pieces are presented on this two-disc set, Bieżan appearing on several (on piano and Yokobue flute), with the participation of Jacek Malicki (electric guitar), Zdzisław Piernik (tuba) and Marcin Krzyżanowski (cello).

"Archangel's Sword" is a tape work from 1980, filled with ringing tones and a sense of underwater mystery, managing to skirt most of the patinas that I find often coat similar music. It has an investigative feeling and tingles quite nicely, with some lovely dark undertones and knocks toward the end. "Atmospheres" and "Birds", from 1972, sound a bit like strung-together improvisations, guitarist Malicki very Frithian at times, Bieżan playing delicate, slightly abstract piano and going for a shakuhachi sound on the transverse flute--pleasant and well-done, if with a bit on ECM tang. ANother performance from 1972 is simply titled,"Improvisation" and documents a live set by the Intuitive Music Group, featuring Piernik's tuba and live sound shaping by Wojciech Chyła. Without going so far as to make a qualitative comparison, parts of it sound very AMM-like (circa "The Crypt"), though others include a satiric edge that was never in AMM's repertoire (and don't help matters here).

Disc Two opens with the title cut, "Polygamy", another tape work from 1978-79, more substantial than "Archangel's Sword",, with a thicker ply of sound, again happily edging toward the dark and dank, leaving the "humor" behind and dispensing with much of the typical tape parlance of the period--impressive. "I Was and I Was", for tuba and cello, in interesting for the contrast, Piernik staying quite low and growlsome, while Krzyżanowski treads more lightly, using the vocabulary of the classical world, from neo-Romantic to Pendereckian, though again, it seems that he can't avoid, at times, casting the low horn in a semi-comedic role. The last half of the piece quiets down and works quite well, even if the cello assumes the jester's hat momentarily. Lastly, we have "Isn't It?", an electronics piece and the final work by Bieżan before his death (from injuries sustained in a car accident). It begins with light percolations, descends into a wonderful, whirling, chaotic maelstrom, ultimately surfacing with a jaunty little rhythm, skipping on down the road. The composition seems to encapsulate Bieżan inasmuch as I can determine from his music as offered here. Inconsistent perhaps, but pretty fascinating work that I'm very glad to have heard.