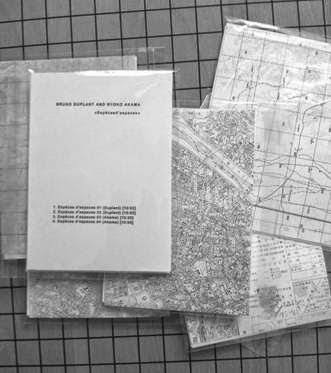 Four pieces, each about ten minutes long, the first two composed by Duplant, the last pair by Akama (all graphic scores, based on the work of Georges Perec), performed by both.

Though I've been given photos of the accompanying stuff that comes with this release, I admit I'd rather be able to deal with it tactilely than via download, which is how these were heard. The first work, for instance, is presented as a small jigsaw puzzle: 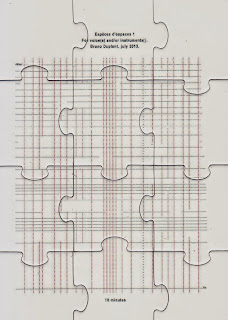 Well, I might have made the tiles more varied in shape, but still...It sounds great, though, a combination of ambient sounds, including some underlying bass-like tone, electrical pops and, most intriguingly, an ongoing sequence of noises that sometimes sounds like the snipping of scissors, others times like thin, smooth metal discs being rubbed across each other in one's hand. Also, unlike almost everything in this neck of the woods, there are frequent, very brief stops and starts, a feature that lends a really nice structure and, oddly, adds to the sense of rapid forward movement. At least a portion of the score for the second track shows a drawing of a tree. Here, we again hear various layers of ambience, clicks, beeps, hisses and the like, fairly muted, with Akama reading text, presumably Perec, in French and English, leaving substantial space between phrases. It's very low key, easy to listen to and/but drifting pass without making a real impression. That may be a strength, though. 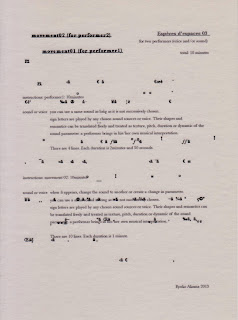 It seems to be the first option that's performed here, the piece divided into four approximately equal parts. We hear a series of patient, beautifully suspended bell tones, tapping, soft crumpling static, etc. with Duplant's calm voice pronouncing individual words in French. The music grows subtly more intense as it continues, a strong sine tone manifesting, but the voice remains steady. A wonderful piece. The final work involves a map (showing a portion of South Korea shoreline and sea) and text instructions presented in poetic fashion. The sounds include something of a wave-breaking aspect, though it could just as easily be torrents of steam or a lava flow. It's very full, several layers thick and, like the first track, carrying a forward surge. A high, delicate sine-like tone (or complex of tones) pokes in for a few moments, very lovely. It crumbles away, returns, sizzles a bit, then disappears.

A very rewarding venture, well realized. Give a listen. 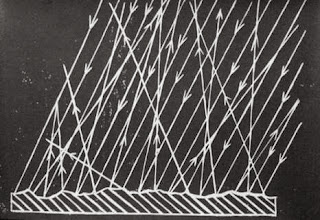 If I understand correctly (and I *think* I do), D'incise constructed an electronic score consisting of a series of chords, 38 of them, to be played in a fixed sequence but with their individual durations to be multiples of ten seconds, at the discretion of the performers, the chords to be separated by four seconds of silence, the total performance lasting 20 minutes. Atop this, the musicians create sounds on prepared drum heads, following certain directions and preferences but allowing for a substantial amount of variation from one version to another.

The disc contains three tracks: a rendition by D'incise, one by the duo of Jamie Drouin and Hannes Lingens and the original chord sequence. I'll take the last track first. Aside from casually noting that some of the sequences don't seem to take the 10-second admonition too seriously, one notes that they do vary in length, more or less randomly (or at the non-random discretion of the purveyor}. More interestingly, the sounds usually possess an ambiguous tonality, very rich but with a wonderful sweet/sour complexion, leaving me curious as to whether or not there was a specific method of construction or if it was entirely "sensual". It's enjoyable enough listening on it sown but (admittedly, perhaps only in hindsight) you can hear how it could serve as a template or underpinning. Listening to D'incise's own full version, you immediately notice the added vibrations of skin, but the relationship between the new sounds and the original is more subtle. They have the same duration but you get the sense of space between them, the electronics underneath, a small space atop (I think of a half-inch or so for some reason) then the dry rumble of the drumhead suspended above. Another clear, yet delicious point is the contrast between the creaminess of the electronic tones and the irregularity of the addition with all sorts of pops and rattles ornamenting the basic skin-rubbing. The result is an unusual and rich contemplative space; as is often the case, I'd love to hear this in a live situation imagining a given room would only heighten the complexity. The piece as realized by Drouin and Lingens necessarily involves more sound and a consequent increase in density (not to mention range of sounds, though the pair here stay in fairly circumscribed limits), though there remains that crucial, to my ears, amount of space between layers. The base tones, by this time, have become something like old friends and produce an added point of interest in hearing how they're used and molded. I found the duo version the richest and can only wonder about variations with other musicians.