The Grey Ladies is the local name for an English stone circle more genrally known as Nine Stones Close. In this brief (17-minute) work, Perry brought a team of recorders and at least one vocalist, Samuel Ayre, to the site and, judging from the photos included in a fairly elaborate sleeve design, including a transparency, had them both record the environment and their own voices in various degrees of proximity to the monoliths, distant to right up in their "faces". I'm not sure if it's the case, but my impression is that the performance documented here is but one extract from that event and I'm also guessing that the vocals were more or less improvised by Ayre, with the electronic accompaniment perhaps by Perry. Maybe the site is especially quiet but one odd thing that struck me immediately was the lack of obvious ambient sound save for, I think, some buffeting of the mics by wind later int he piece. You hear Ayre, usually in a deep wordless drone, sometimes using mild vocal chording, with low, oscillator tones (close to a bass clarinet in character) and a rough crackling from an obscure source. Ayre appears to be approximating the sine tones though it's tough to say if the beats one hears are from that relationship or inherent in the electronics.

So, a couple of things. Some of us, and I guiltily include myself, have a kind of inborn prejudice against at least certain vocal stylings in experimental music and while Ayre doesn't get to Tom Buckner territory, there are enough intimations of that to cause slight discomfort in this listener. Second, listened to purely as sound/music, without regard to context, "Grey Ladies" is only moderately interesting to me. Third, most importantly, if there's any real use or reference to the stones in question, I'm missing it. I'm hoping the thought wasn't simply that nearness to the site would engender some kind of quasi-mystical transference of aesthesia. Is Ayre singing into a concavity that's shaping his sound? At the site below, where you can hear an excerpt, there's the stated goal of attempting "to resonate a stone circle". I don't know but I'm not picking up any particularly stonelike aspects here; I could easily be missing something, maybe you had to be there. 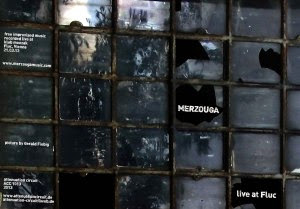 Quite a different offering from Merzouga (Eva Pöpplein, computer and Janko Hanushevsky, prepared bass guitar), at least compared to my previous exposure to their work--a live, improvised set from 2012.

Their music somehow lies well outside the normal eai ambit, though it's hard to pinpoint exactly where. Hints of Fennesz sometimes, certainly a similarly great concern with color and Hanushevskys bass more often than not fulfills a more or less standard role, providing a bed for the computerized sounds and field recordings generated by Pöpplein, enough so that you can listen to it as a kind of severely attenuated, pastoral pop music, but there are other things going on as well. It's a very relaxed set, seemingly without any preconceived trail markers, quiet as a rule but active, occasionally settling into moments that approximate song-forms (some of the most rewarding minutes, to me, as occurs about twelve minutes in, for example), though the last minute or so enters a frenetic area and the performance ends with a sudden, harsh plunk. Up to then, we've been on a kind of amble, Pöpplein's sounds verging on the figurative (birds, insects, more) but never, happily, coming into clear focus. Once in a while, the bass grow a bit busy for my taste, but usually just provides a very accommodating cushion as well as elaborating on the field recordings. It's dreamy and beguiling, the pair maintaining interest pretty consistenly over almost 40 minutes, perhaps never cutting too close to the bone but also avoiding easy prettiness and discovering some lovely sound-worlds along the way. Worth checking out.