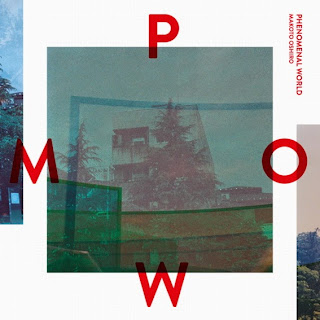 It may seem to be belaboring the obvious, but when a sound artist purports to be dealing with physical phenomena (not that there are other kinds), I expect the results to be, well, physical. In the sense of being present, substantial, corporeal. And Oshiro's double-disc set presents seven pieces that fulfill this expectation to a marvelous degree. Ideally, I also enjoy a balance between scientific investigation and the resultant aesthesia, the sort of thing that Lucier, at his best, achieves and again, Oshiro's work score high using this criterion.

Oshiro helpfully provides details on each piece. "Trans-Video Music" documents his early attempts to translate video signals into audible patterns, a surprisingly slow flow, lava-like, of multiple streams, something you feel as though you could sink your arms into up to the elbows, receiving a mixed pain/pleasure sensation. He researches the resonating capacity of a pump hole beneath a basement floor, primary wails of high feedback set against their faint echoes on the walls of the rooms, establishing a clear sense of air volume, further enhanced by water drops and mysterious, dull bangs. "Cycles" uses iterative processes, relays attached to small vessels, set at various, irregularly-spaced rhythms, overlapping, coalescing into drone-like patterns, separating again, the wide variety of timbres creating a miniature, thriving forest of sound.

Disc Two opens with "Unellion", the name of a device invented by Oshiro that, via piezo-pickups and metal plates, generates feedback loops, heard as metallic, groaning tones, bearing a good deal of oily grain texture. It also evinces a wonderful obsessive quality over its 24 minutes, Oshiro quite willing to just let the machine play out, knowing that the unspooling sounds will, in time, generate their own levels of fascination if the listener is as intent on concentration as he is. For me, it pays off in spades. "Auto-Wind Chime" involves a misleading simple construction in which a cooling fan is placed, facing upward, in a glass jar, in whose mouth is hung a small stone, the strength of the wind current causing it to clink against the side of the jar in an unpredictable manner. Here, several such, with differing capacities, string lengths, etc. are overlaid, yielding a delicate play of whirrs (the fans) and tinkles--lovely and engrossing. The next track, "Pipe, Metal Plate and Fan", sounds a bit similar--hollow taps resonating--but is generated a bit differently, using a metal plate with stones and a spring attached, fan-blown but also incorporating thin lines of feedback; again, strikingly beautiful and eerie. "Interference", closing the album, does just that, several of Oshiro's device set up so as to interfere with each other in unpredictable ways. As with all the pieces here, it's absolutely absorbing to simply sit and contemplate, delivering a somehow real sense of another, contained but complex world in action, going about its business and, along the way, producing a unique sound world, both gritty and strangely gentle.

"Phenomenal World" may well appeal more to those enamored of Lucier-like experiments, perhaps less to the improv crowd. I liked it a helluva lot and could easily transport myself to a space occupied by these machines, just sitting (perhaps adjusting things now and then) and bathing in the sounds. Highly recommended.

Nice review, but the link for ftarri doesn't go to the label, but an online etymological dictionary.

Hah! Thanks Caleb--worlds of Just Outside and facebook in collision.....Good to see you here, hope all is well!