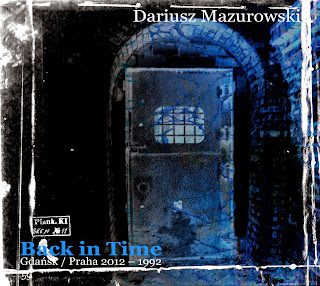 Dariusz Mazurowski - Back in Time (Mathka)

Ten pieces mostly for tape from this Polish composer, hitherto unknown to me.

Over the past few years, I've had occasion to hear music from a number of Polish electro-acoustic composers, largely via the Bôłt label. Some of it has stood apart, in my ears, but I have to say that much is a kind of blur to me. This is partially, if not largely due to both my relative lack of knowledge in the genre as well as my having not a huge amount of general interest in it. Something about what tends to get grouped under the mantle, "tape music" has, for me, a certain amount of sameness, a kind of sheen that doesn't automatically draw me in. So if I say that Mazurowski's music, as represented here (and the pieces span 20 years, from 1992-2012, so I assume it's a good sampling) strikes me as just ok, you'll have to bear in mind this existing prejudice.

I can say that I find it subtler, less purely effects-driven than much other work I've heard in this territory. Even if the underlying language is similar, the tonal inflection is more muted, carries less of the ear-blinding sparkle that I find too often to be the case. Still, the elements get a bit tired: the turntables, the garbled speech extracts, the "ironic" influx of classical music snatches, the historic audio documents (WW II speeches, phone calls with astronauts) etc. Sift these out and there are very nice stretches--the lonely, metallic echoes during parts of"Aleatoric Quartet", the soft moments in "Quartet for 4 Turntables", the vaguely Riley-esque (circa "You're No Good") iterations of "Art Against Decadence" and tyhe purrs and growls of the concluding "Ice Totem". It's very well constructed work and doubtless, will serve those with real interest in the area just fine, but it remains hard for me to get too excited about. 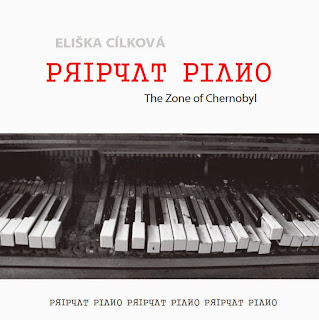 Pripyat was once a city of 50,000 but then Chernobyl occurred. Cílková visited the deserted city in 2010, 24 years after the event, and happened upon an old piano in an abandoned apartment. She then sought out others, eventually compiling the music heard here, eight pieces for eight different pianos in various stages of degradation. The clear precedent for this approach is the work of the Australian composer/pianist Ross Bolleter, though his pianos (and accordions) had tended to be "cured" in the Australian sun whereas those discovered by Cílková necessarily have a more tragic aura about them. Unlike Bolleter, who more or less glories in the low level of "traditional" sound he's able to wring from his objects, Cílková tends to find the most conducive aspects of a given keyboard: if the low notes are fairly functional, that's where she dwells; if only the strings yield clear tones, then use them. But she also remains cognizant of the environment, so one hears the water leaking through the ceiling onto the piano in the city's Concert Hall, the resonance of an otherwise empty apartment or the ticking of a Geiger counter. She uses electronics to construct a repetitive series of interlocking patterns, including much knocking on the wooden bodies, on "Torsos of non-playing pianos", integrates a "healthy" keyboard with the found ones ("In Prague"), resulting in very poignant, fractured melody and ends with a lovely evocation of church bells, gently tolling some injured, upper register keys.

A very affecting release. This is also my first exposure to Eliška Cílková's work and I'm eager to hear more.