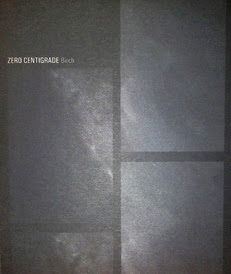 A simple enough structure, well executed, results in a very attractive recording. Tonino Taiuti and Vicenzo De Luce, on acoustic guitars, send their music from one area to another and back over the course of some 26 minutes, an enjoyable and subtly complex journey. The body of the work is bracketed by two short episodes of the pair plucking strongly at their guitars but leaving substantial space around the notes, perhaps echoing Fahey at his sparest, both tonal and abstract. After five or six minutes, they then allow various forms of feedback to enter the picture, gradually at first then quickly coming to predominate. Several general characteristics of the acoustic guitars are always retained--a certain buzz, the overall tone--even as they're bent, warped and twisted, often resonating quite deeply, as though the listener is placed right beneath the sound hole. The variation within the world is captivating, ranging from smooth throbs to harsh scrapes and much between, until a single piercing note announces the return to the acoustic realm, wisps of electricity still flitting about above the proceedings, but soon evaporating, the guitars stroked lovingly to conclude. Concision within which you hear expansiveness; no mean feat and well done here. 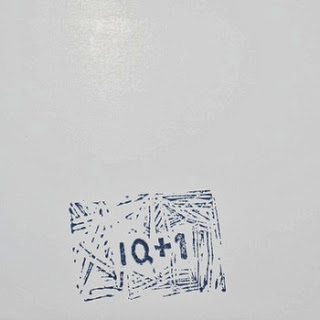 An oddly interesting recording. You can tick off influences as the music progresses: certainly electric Miles rears up a few time and also the early Art Ensemble of Chicago; even a seeming nod to "No Pussyfooting" at the end. But the overall sound manages to slide between these reference points, not necessarily resulting in something terribly new but it does become music that sounds reasonably unique. Bagdasarov's baritone often feels as though its charting the course here, played deeply as a rule (and the source of the Roscoe Mitchell tint; the kalimbas add to the AEC vibe as well) but the synths and, presumably, other electronics, fashion a pulsing bed, sometimes almost a rhythm, that carries things along with a certain amount of smoothness and also, along with the occasional muted trumpet, is the reason that "Bitches Brew" and the like is evoked. Not to belabor the point but, towards the end of the first track, the combination of soaring clarinet and burbling electronics also caused me to flash on that old S.O.S. (Skidmore, Osborne, Surman) album on Ogun...The stew is fairly dense, always a surge of activity from several quarters, more of a free jazz than post-AMM sensibility afoot, but never really overbearing. It's not exactly up my alley, of course, but very well realized on its own terms and worth a listen if the above mélange would seem to strike your fancy. 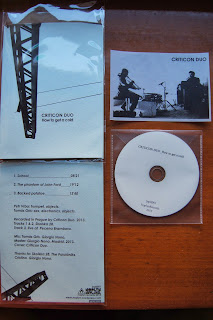 Petr Vrba reappears as half of Criticon Duo (trumpet, objects--the photo insert seems to show him playing a reed trumpet and, indeed, I think I hear it often), joined by Tomás Gris, also deploying objects as well as saxophone and electronics. The music is much closer to "eai" than the above though by and large of a perfunctory sort. Gris utilizes standard extended techniques on the saxophones (alto and baritone, I think)--breathiness, key clacking, etc., doing so effectively enough, intertwined with Vrba's objects, often more or less percussive in nature, at least when the trumpet isn't in use, the pair buoyed along by cracked electronics of the kind we're entirely used to. It's fine just not so out of the ordinary. I've mentioned before what I think of as the Mullerization of a branch of eai, the more burbling electronics type, which Günter Müller refined to a point where things became far too routine and smooth. Something of the sort is my impression here as well: too much routineness in the sounds (regular sequences of taps on the sax, for instance), too little thought about placement or even the necessity of making a noise at all. Playing sparse and rarely isn't easy and, as is often the case (to my ears) when difficulty is encountered along those lines, the most rewarding moments are when the musicians essentially abandon that tack and begin playing more fully, more "normally"; that's the case here, as well. Not bad after all's said and done, but a bit dispiriting in many respects. But by all means, hear for yourself.