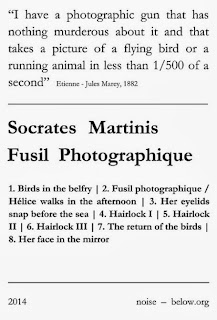 The last release I heard from Martinis was about 17 minutes long, this one less than 11 (a cassette, reviewed here on CDr). But there's much to be said for concision. From the onset, an intensely harsh sequence that sounds like a dozen sparrows being strangled, one expects a noise assault but things rapidly shift, multiple times, segueing to layers of hiss and scoured metal, thick, muted scratches and more. Thats the first minute. The rest proceeds apace, jumping furrows from one burred line to another, with leaps and plummets in volume, wide variation in texture, lending an almost haphazard aspect to the affair, though I'd guess the sections are pieced together with care, if "shot" with the photographic gun of the title. It's less a slide show than the above might suggest and, given its brevity, you can "stand back" and take it in at a long glance, rendering at least semi-audible its writhing whole. Good work.

I have this other disc, which I think came along in the package with the above, though if there was an accompanying note, I've managed to lose it. The disc bears a label "NU Internationl" which yields next to nothing on Google and it's in a plain, white paper CD sleeve. It might be another by Martinis, though I can't match up the timings with anything of his I can locate and, as well, I neither have nor can find an e-mail for him so's I can ask! It consists of nine tracks, totaling some 24 minutes (leading me to think it might stem from a cassette) of softly chittering electronics, a quiet sound-world of alien insects and small animals, occasionally shadowed by massive gong-like sounds going through several transformations, ending in a rattling, empty space. It's an enjoyable set, nicely focussed. If anyone (including Socrates!) can ID it for me, much appreciated.

[Socrates informs me that it's not of his doing, so the mystery remains. Apologies to whomever belongs to it!]

[Ok, mystery solved: The disc is from No UFO's, MPC Tracks Vol. II on the Nice Up International label, a project of Konrad Jandavs. Deep apologies for its origin getting lost in the shuffle. Here's a link to the discogs page] 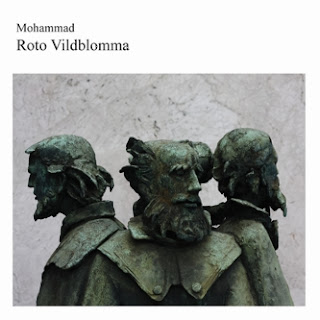 Also a little bit unusual as the disc is a few years old and only made it into my hands via the good graces of Jacques Oger, who had an extra copy. But it's well worth letting people know about, if briefly.

Nikos Veliotis (cello), Coti K. (bass) and Ilios (electronics). Too call it drone music would be oversimplifying--long held lines, yes but with subtle shifts that sometimes, as on the opening and concluding tracks (the latter apparently adding a bass clarinet), have classical overtones. But yes, those sliding tones, ply after steady ply, gauzelike but with enough soot and grain to acquire some tooth. Surging pulse on the fourth piece, altogether great music in which to wallow. Really fine, check it out.