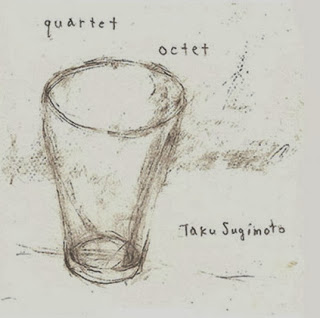 The quartet (Kazushiga Kinoshita, violin; Sugimoto, guitar; Taku Unami, sine tones; Nikos Veliotis, cello) only lasts a couple of minutes, each player creating delicate, spare sounds of about four seconds duration, in three sets of ten reasonably similar sets though with a good amount of interior variation with regard to placement and specific pitch. It's a rather lovely miniature, a seemingly simplepoem that has more richness than is apparent on first glimpse. The octet is without Kinoshita but adds Klaus Filip (sine tones), Ko Ishikawa (sho), Moe Kimura (voice), Radu Malfatti (trombone) and Masahiko Okura (clarinet). It's kind of a looser version of the quartet, the notes' duration allowed more latitude, some instruments taking substantial time between contributions (though it never quite goes silent). As Richard mentioned in his write-up, Kimura's voice stands out a bit here, though it doesn't particularly bother me. If anything, I'd like to have heard clearer sound quality. I'm not usually an audiophile kinda guy and understand that this is a live recording, but I can't help but think a more pristine ambience would have helped matters. As is, it's a gently swaying work, almost pastoral if you choose to hear it as such, and odd combination of the sparse and the sing-songy. Repeated listens yielded different results: sometimes it went by almost unnoticed; other times, I'd pick up on a hitherto unnoticed, surprisingly melodic mini-phrase--there's an especially lovely one just before the end. About two thirds of the time, I've ended up liking the longer piece a good bit, the other third I've been not so impressed. I figure that in itself is (to me) interesting enough to recommend it. 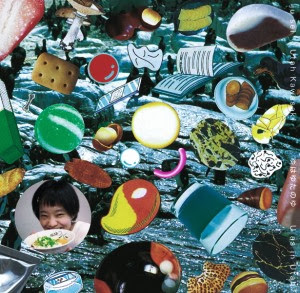 Been quite a while since I've heard anything from the fellow with the greatest name in eai and this is quite a strange one. ju sei is a duo consisting of Junichiro Tanaka (guitars, effects, Kaossilator_ and sei (vocals). I've no idea about their routine output (if it's much different than what's heard here) but on this disc, there's a wide range from drony to jpop balladry to naive hip-hop and much else, little of it, I should say, inherently appealing to me (the the song that appears as track #7 on the first of the two discs here is very charming; I have a notion that's it's a cover of some pop song I don't recognize. There's also a portion of the next section that strongly reminds my of Otomo's rendition of "Super Jetter" from the Takeo Yamashita recording). But generally, with ju sei, I hear a veneer of whimsical wackiness that rather rubs me the wrong way. Kawasaki, on synthesizer, adds adornment and I have to say, nothing that stands out as much more than coloration. Granted, this is a live recording and, per the website, Kawasaki had no prior talks with the duo, in a sense placing it within the ambit of many a free improv session, where "failure" is always an option. If this is meant as meta-commentary on pop music, well, eh, so what. I assume it's more an actual collaboration between musicians who appreciate each other's work and I suppose it works fine if your area of interest overlaps. Say, an updating of aspects of Henry Cow, Tenniscoats, noise-improv and synth-y psychedelia. Save for snatches here and there--the aforementioned and parts toward the end of the first track on Disc Two, where there exists a fine combination of noise and deep, lush synth, I was left largely unmoved. More than most, you mileage may vary.

Both available via Erst Dist