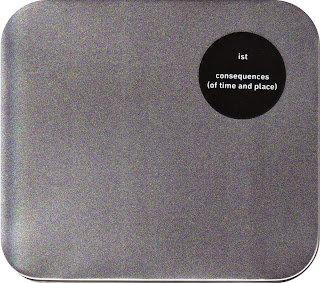 Another in the continuing series of archival recordings on Confront, here documenting a 1997 performance of the venerable IST trio (Rhodri Davies, harp; Simon H. Fell, double bass; Mark Wastell, cello; there's a bevy of percussive sounds on the third cut, though perhaps it's Davies messing with his axe). Its an interesting set both for the music itself and for its moment in time with regard to the the burgeoning quiet improv "movement". What's immediately apparent is how attached the three remain, at this point, to the spikier branch of free improvisation that was quite prominent in England from (at least) the late 80s, not so loud but very active. There's nothing minimalist in their approach at this point and scarce few hints that it might be a direction they'd take, either as a group or individually (Wastell and Davies would make this turn, Fell somewhat less so, at least in my experience of his work, apart from VHF, whose disc on Erstwhile was recorded within a year to year and a half from this date). I must say, there's something very attractive about hearing Davies, by and large, once again pluck at the harp while Wastell often enough bows or plucks the cello in a manner, if not style, that his teachers would recognize.

For this listener, the most exciting sections are actually when the trio is at its most vociferous as in the aforementioned track (titled, "Improvised Explosive Device") and much of the closing "Broad Strokes (for Franz Kline)", where the music verges on the rollicking. They create a real forest here, great depth and a level of activity that, while quite high, feels organic and causal. There are ups and downs for me, looking back over 17 years but I found that the more I listen, the more immersive the material became. Despite stylistic attributes that are less enticing for this listener than they might have been at time, the sheer musicality of the participants ends up carrying the day more often than I would have guessed. Apart from the history, there's good, gnarly, challenging listening to be had here. "Consequences" indeed. Delve in.