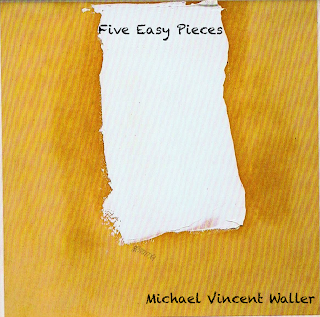 A set of five short solo piano works, performed by Megumi Shibata (the first four) and Jenny Q. Chai (the last one). To the small extent I've heard it, Waller's music has centered around a kind of melodic classicism, the source of which I struggle to ascertain. He references, in various fora, many of the grand names of the Post-WWII avant-garde (two of the pieces here, "Per Terry e Morty, I & II" cite, one presumes, Feldman and either Riley or Jennings) but it's usually tough to pick up more than a glimmer of direct influence. Tinges of minimalism appear now and then; patterns repeat but more in the manner of a Ravel than a Riley. More than anything, there's a sense of nostalgic romanticism which can be good or bad. There's beauty in the progressions, which are stately enough for me to think "processional" now and then but there's little sense of hesitation or uncertainty; one gets the feeling of very well-crafted exercises with few chances taken. Often, when they reach a brief, hazy ecstatic feeling (my favorite moments) I think of Jarrett's Gurdjieff pieces which have a similar, vaguely mystical aura. Interesting, well-molded music but I'd like to hear Waller push it more, risk more failure. But then, I guess, they wouldn't be "easy pieces".