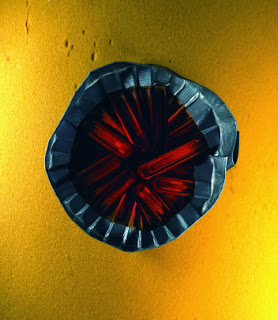 Everyone's favorite old wood organ duo is back with another highly enjoyable effort. The enigmatically titled "So Lobes Drape as Such Gills Over a Hangman's Pit" features a Kinder pump organ which is coaxed to emit super-deep thrums and throbs, a rich, wet grind. Taped sounds, fast forwarded or reversed, arise within various wind patterns that shift into an altered version of the beginning, the low tones moderated but still growling menacingly before the enormous centrifugal force collapses in on itself. The far longer (25-minute) "Soft crown", using an Estey brand instrument, necessarily takes its time to unfurl, quiet hisses turning out to be a vast apian swarm, laying waste to a field of crickets. They apparently start a fire (I'm reminded of the locust swarm scene in "Days of Heaven"); things appear to be crumbling, falling apart. Me, I'm wondering how (or how much of) this is being derived from the pump organ, poor thing. An uneasy calm settles in, the fauna circling desultorily, then a kind of tidal surge takes over, semi-regular, pulsing, covering everything uniformly and bringing the day to a peaceful end. 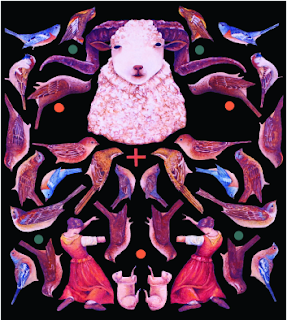 A sort-of-live recording from 2013 with Clément (analog synth, field recordings, objects), Jones (guitar, electronics), Olsen (tape players, amplified objects, trainer guitar) and Ruhlmann (reel to reel, cymbal, ukelin, objects) honoring, I take it, the poet Charles Cros otherwise unknown to me but, it seems, "muse to Manet and Mallarmé". I say "Sort-of-live" because, as I understand it (via a little bird), Jones' contributions came via a pre-recorded session, played into the room in which the three Canadian musicians improvised. Whatever the case, it's a strong effort, with AMM-ish tinges. The first of the four tracks especially, with low-level hums, scratchy-soft static and radio snatches, evokes that model quite well, though perhaps with more of an ongoing, connective drone-like thread than AMM would generally employ; solid work. The second cut, bearing the delightful title, "An insect tests the circle of light", is very intriguing in that on the surface, it sounds very much like an extension of the first but on repeated listens, you realize it's quite different, generating a soundscape that has an entirely other sense of grain, very fascinating, active in some strata, serene in others, altogether lovely. Both of the final two tracks, "May, is out there, three" and "Not vital" are shorter, about five and seven minutes, and never quite congeal before they're rather abruptly ended, striking an odd note. The first two make up for this, though, fine stuff there.