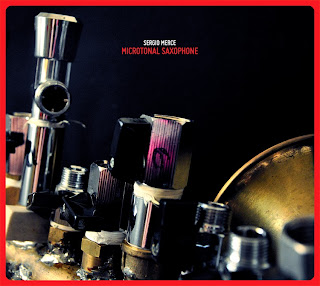 I think it's fair to say that, among labels catering to the portion of the musical spectrum with which we're largely concerned here, Jacque Oger's Potlatch has devoted more time than most to the saxophone, that often shunned instrument, looked at askance (by some) due to the amount of seemingly unremovable baggage retained from its jazz and free jazz incarnations. Perhaps the fact that Oger was a saxophonist himself in his youth (with the fine ensemble, Axolotl in the early 80s) accounts for this. In any case, a listener coming unaware to this recording, without benefit of specific knowledge or seeing the packaging, would be hard pressed to identify the sounds as saxophonic in origin--barely a shred remains, as the Argentinian Sergio Merce has entirely re-imagined the instrument, essentially producing a brand new one. 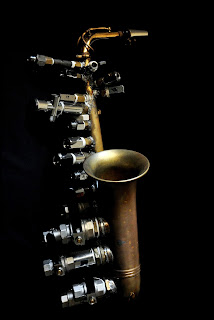 As can be seen more clearly above, Merce has taken an alto saxophone, removed all the keys and replaced them with various household plumbing fixtures. The videos I've been able to locate (like this one: http://www.youtube.com/watch?v=yjECQo1XvkE) are dimly lit, but I assume he simply uses his fingers as keypads, covering the open apertures. I also take it that by virtue of the devices being screwed in, he's able to adjust the resultant pitches to an extremely precise degree, resulting in the micro-tunings. Plus, I have to say, the object simply looks fantastic. What does it sound like? Well, first off, as explored by Merce on this disc, it's all soft, long-held, gently fluctuating tones; he doesn't (thankfully) take a Brotzmann approach to it--I've no idea how that would work. While it's possible to detect a reedy sensation hovering in the air, the overriding feeling one gets is of electronics. Merce uses a sustain pedal to enable multiple, co-existing lines as well as creating his own multiphonics, enabling a music that approximates some Lucier compositions wherein sine waves and an acoustic instrument are integrated. There's a marvelous shimmering effect in action almost all the time, transparent scrims of tone wafting about, interacting--really a wonderful sound.

The pieces strike me more as explorations than compositions as such, as though Merce is still negotiating his way through the intricacies and mysteries of his creation, which is entirely appropriate. The connections are ephemeral and even ghostly, perhaps with echoes of Radigue (that's likely to be more me than Merce, but I could easily imagine the microtonal sax being put to use by Radigue). He takes his time, allowing the lines to weave their own patterns, very calm, very beautiful. Four tracks, not appreciably different, just subtle variations in pathways, slight shifts in tint, all containing some level of grit that prevents things from sliding off into pastels. Very much worth hearing on its own and I look forward to hearing Merce wield his axe in context with other musicians int he future.