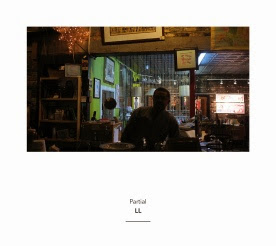 I've often opined that there are some folk who simply strike me as have such a marvelous, inherent (to my ears) musicality that most anything they do somehow manages to sound good. Not that I can parse out the contributions of Joseph Clayton Mills to Haptic and Noé Cuéllar to Coppice and other formations, but I have that sense here as well. As Partial, the pair made use of the kibble found in the basement of Pilsen Vintage and Thrift in Chicago to construct the two long tracks here (and the delightful coda), creating some outstanding, intimate and, well, very musical music.

"Marcel" uses material found in the store but "augmented" with other sources. It builds wonderfully from the opening sounds, crests and falls off suddenly into a more disparate world, rumbling and popping. You *do* get the feeling of a large, subsurface room, aflutter with activity. It's interesting knowing, via text, the nature of much of the sound sources (as there's no way you'd know from simply listening, in the sense of the kind of patina it casts over the piece, a subtly moving, nostalgic one. Much ground is covered; I especially enjoy the creaking and squeaking later on, a wonderful seesaw effect, very present and tactile. "Paul", built from a series of duo improvisations Mills and Cuéllar recorded when first investigating the scare is sparser, rawer, but no less captivating. Rubbing sounds predominate, adorned by metallic pings, scratches, dropped items (recorded well enough to have had me up off the couch, checking to see what happened in the other room) and a distant hum--verbal descriptions wont convey much but, as above, I hear a really fine sense of what's musical amidst these "non-musical" sounds, an acute sensitivity at play.

As a final grace note, we have "a SIngle screw of Flesh is all that pins the Soul" (great line which I shamefully admit having to look up--Emily Dickinson), a simple, gorgeous recording of a music box found int he thrift song, wound up and played as is, no more, no less. Very moving.

As is the whole disc, a a beautiful, superlatively musical document.