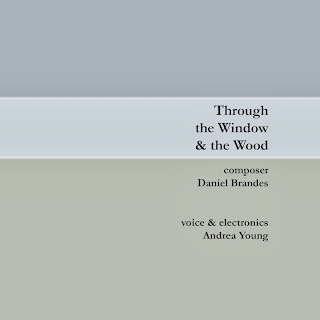 Had I heard this blindfolded, I likely would have guessed Antoine Beuger, both in the calm temporal extension and in the quietude and repetition of a serene space. Not too far afield as Daniel Brandes is affiliated with the Wandelweiser composers and, in the accompanying notes, cites his walks and conversations with Beuger as a shaping influence. What he's done here is to take the texts of several poems by his brother Benjamin (or fragments thereof. The poems are printed in the booklet and, in my less than knowledgeable opinion about things poetic, are often quite beautiful) and has them sung by Young, softly, slowly, surfacing now and again during a given work's ten-minute span. The ongoing sonic elements are also sourced from Young's voice, though altered through samples and time-stretching enough that I think it's fair to say that, without being told, there's little chance one would recognize them as stemming from a voice. Always very hushed, my impressions would have ranged from enhanced room tones, to breezes to breath through slightly resonant metal tubes. As is often the case in my experience with the work of Beuger and several other akin composers, I find the music particularly amenable to the integration of whatever happens to be occurring in my actual environment, at least to the extent that these sounds are similarly soft and non-aggressive (there was a point, during one listen, where I thought Brandes may have introduced a vague pulse into the proceedings. No such luck, just a beat from the stereo in an adjacent apartment...). Young's voice, though seemingly quite clear, elongates the words to such a degree as to almost obfuscate any definite recognizability. When her voice surfaces it's very much in the foreground but generally appears for only a few moments, singing just a couple of words, before receding into Daniel Brandes' reconstructions of her sounds. All of which works very effectively. Again, though, as with much long-duration work from the Wandelweiser group, the music levies strong demands from the listener if (s)he chooses to concentrate instead of setting it amongst the happenstances of daily life. I found it fascinating and often beautiful but it requires some commitment.

Benjamin Brandes' poems are very imagistic and dreamlike. There's one, though, that stands out for its overtly sing-songy character, which I love I thought I'd print it here, making allowances for the inability to center the lines, as they are in the original. The title is, "How Many Were There?"

I put the ponies
in the parlor

the horses
in the cellar

just to tell her

Did you know that you can create short links with Shortest and get $$$ from every click on your shortened urls.