download universe....It's a little strange "reviewing" things that anyone can, without spending a dime, listen to themselves. I suppose as a pointer to something it's fine, but still...Luddite about some things... also find that I'm sent, via links, many more things that fall well outside my range of interest than occurs with physical items that reach my mailbox. In any case, here a couple that I liked very much... 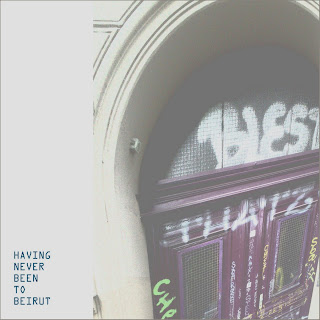 Chang on violin, viola, field recordings and Noyes handling feedback electronics. Four quiet but tough and gnarly tracks, Noyes' low-level electronics against/with Chang's minimal but sometimes antagonistic strings. "Antagonistic" in the sense that he often occupies that territory which, stereotypically, drives people nuts: for lack of a better term, "the squeaky violin", admittedly, not my favorite zone either, though it shouldn't be the case, just a matter of not being able to jettison all the baggage one builds up. So it's kind of tough sledding for a while, to these ears but also a very welcome experience, forcing one (me, at least) to readjust my preconceptions or try to do so. The first piece, "First day in Beirut - composite state - initial encounter" sort of traverses many conditions, from Wandelweiser-ly soft to uncomfortably itchy to a kind of resolution, Chang's violin (I think) settling into a brief and lovely area, almost romantic, toward the end. "Untitled 2" takes a fairly simply structure and works it out very strongly, Chang concentrating on a single bowed tone on viola (if I'm not mistaken) and putting it through all sorts of permutations, Noyes beginning alongside with high sine tones and allowing them to branch into regions tangentially related but generally with a sense of continuity. The five-minute third piece seems a bit throwaway but th efinal one pushes all the right buttons. It's very wide-open and manages to attain something of an epic quality over its 22 minutes, full of air and undulations. Huge variety of sounds here but somehow they remain almost backgrounded, very much part of the fabric. Strong piece, beautifully realized.

You, of course,can listen and see if you agree. 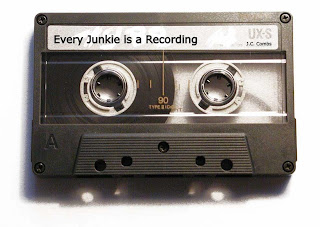 J.C. Combs - Every Junkie is a Recording (Digital download)

Admittedly, an album title that, on its own, would not have me putting in any extra effort to hear, but...it's really pretty good!

A 34-minute piece for electronics, though it seems as if some percussive elements may have been sourced, The calmly paced progression that begins the piece reminds me of those slow Javanese ensembles (Jegog?). Here the basic sound is somewhere between a tap and a pluck, quickly becoming absorbed in the general, ringing haze. Very hallucinatory, very enticing. The serene rhythm disappears into the void, leaving a large, rippling eddy, reasonably interesting on its own if overstaying it welcome by a few minutes before it begins adding layers and intensity in anticipation of the recurrence of the initial theme heralded by some lovely bell sounds. But the gentle ambiance cedes way to a fine dark surge, inky water rushing by which, in turn, expands into a larger body, still agitated and roiled. The ticking of a clock suddenly enters, all else ceases.

A scenic ride, very enjoyable, hear for yourself.