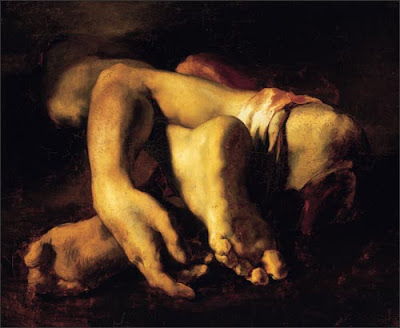 Amazing painting, imho. Sergio, in a comment below, referenced Zorn and the sort of photos he used (does he still? haven't kept up) as album covers since around 1990, beginning with the Weegee photo on the first Naked City disc. I always gave him a lot of credit for having a discerning eye in this regard, for choosing images that resonated far beyond the merely grisly. The photo used for Leng T'Che, for instance (btw, probably my favorite Zorn recording) is just astonishing in a complicated/horrific way: 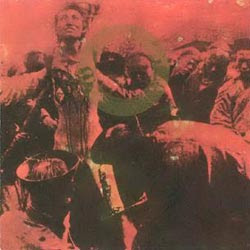 The sheer gruesomeness of the scene is uncomfortably offset by the transcendent look in the eyes of the individual being tortured. iirc, when discussion of this came up on the zorn-list, mention was made of the victims having possibly been heavily drugged; one would hope so. But there's also the stolid looks on the observers there, just going about their business. It affects on many levels even, one is embarrassed to say, formally. Not so surprising, I guess, that this photo (this image is cropped from a somewhat wider view in the original) doesn't appear in collections of "great" documentary photogrpahy of the 20th century. Too close to the bone. For those who can stomach it, there's a page documenting another instance of this form of torutre/execution here 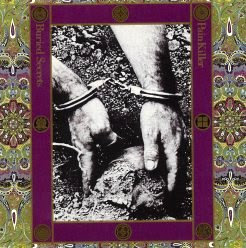 I was also always very taken by this photo, from the second Painkiller disc. Great implied narrative here (why the handcuffs? who is the skull?) as well as being a purely beautiful image, with the bend of the hands and wrists, the cuffs, the dark around the skull, etc.

The second image is discussed pretty extensively in George Bataille's _The Tears of Eros_. There's also a discussion of a different set of photographs of the same kind of torture in James Elkins' _The Object Stares Back_, which is an excellent book on the vicissitudes of seeing.

Nirav, thanks for the pointer on the Elkins. I don't think I've ever read him and that book looks really interesting.