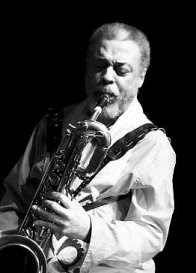 One of the first times I ever ventured up to Environ, maybe the first time, a month or so before I began working there, was to see the Hamiet Bluiett Big Band. I can't for the life of me remember who was in the band, though I imagine it probably included David Murray, Philip Wilson, Fred Hopkins, Olu Dara, Amina; there were 18 or 20 musicians.

There were four of us in the audience. After each number, we tried to applaud very loudly.

Bluiett actually lived right next door to me at the time, on West 24th St. I think he did--his wife certainly did and he was around a bit, though I was never quite sure if he actually resided there or not. He wasn't the easiest person to talk with or to deal with when it came to setting up performances. He had, not unjustifiably perhaps, a very skeptical view of white-owned jazz lofts and Fischer was pretty white. Around that time (1977), I caught Bluiett playing at Jazzmania on East 23rd St. After the set, he announced some future dates of his, including one at "Plantation Environ". Gee, thanks. fwiw, Environ's policy was that the musicians rented the room for the evening (about $30, iirc, which was simply the monthly rented divided by 30) . They then kept 100% of the gate up to a certain figure, maybe $200 or $250. Any monies in excess of that were split 50-50 between Environ and the musicians. Needless to say, more often than not that ceiling didn't come close to being reached.

So the sort of disgruntlement evinced by Bluiett towards Environ was a little irritating. Nonetheless, he was welcome to play and did so on occasion, including one particularly memorable event. It was a solo performance, just baritone. Except that Bluiett divided his time in about five minute chunks between furious, impressive blowing and extraordinary and frightening vocal screeds, giving full vent to the range of his complaints against the world, the jazz establishment, the lofts and anything else that came to mind. It was one of the scarier things I've ever witnessed, not the least because I (and everyone else there, I'm sure) wasn't at all sure that he hadn't really lost it. I'm still not. You seriously considered that he might start whaling on the audience, scything through them with his baritone.

His "Clarinet Family" from 1984 is the only thing under Bluiett's name I have on vinyl. I think John Carter had already created a similar ensemble under the nom Clarinet Summit. Those were the days when every instrument seemed to have its "summit", right? By '84 all the WSQ variants had gotten somewhat tired and this isn't really an exception. By the way, I don't see it mentioned often enough that the genesis of the WSQ was as a result of a track on Braxton's great "New York, Fall, 1974" album for Arista, where he teamed up with Bluiett, Hemphill and Lake. Another little factoid: When they first formed (late '76 or early '77 I think), the original working name was The New York Saxophone Quartet. I have a publicity photo to that effect. Unfortunately for them, there was already a group by that name (!), a classical ensemble. D'oh!

Anyway, this album features a still very young Don Byron, Dwight Andrews, the eminent Buddy Collette, John Purcell, Gene Ghee, JD Parran and Kidd Jordan (I'd forgotten he was here! Really never liked his playing) on various shapes and flavors of licorice with Hopkins and Ronnie Burrage in the rhythm section. It's OK, I guess, but aside from the predominence of clarinetry, it's not too distinguishable from any other 100 records of the time. Byron's dedication to Machito, "For Macho", is pretty nice, though.