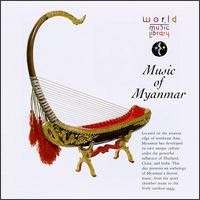 I don't have the above-pictured album but I hope to one day. It's one of several hundred issued (I think beginning in the late 80s, running through the mid 90s) by King World Music Library, a bland sounding name for an amazing record company. I don't recall how I first stumbled across them or which was my first purchase (maybe the Kim Sinh disc?) but their batting average is astonishingly high. In fact, I've yet to come upon anything on their label less than "very good". And their are tons of them from all over the world, from Turkish military bands to Korean Sinawi music to Central Chinese Islamic music to Peruvian brass bands.

However, I believe they closed up shop several years back and the discs became very, very difficult to find. I stumbled across a British site a couple years back, Far Side Music (for some reason this site isn't allowing the link--it's www.farsidemusic.com) when our finances precluded such extravagances, that carried a goodly stock of WML releases. Steve Smith just reminded me of its existence and, since I can now afford a splurge here and there, I plan to make regular visits and order what I can. They don't come cheap at 15.99 pounds per disc, but as far as I'm aware, it's the only source. If anyone knows differently, please let me know.

As is my wont, I'll probably just make my way from geographical are to geographical area, filling in what I don't have. So I began with two Korean discs, one byAn Bichwi and one from Chukp'a and Tong Jun Kim. We shall see.

[edit: I should probably have a firmer grasp on exchange rates before pulling the trigger on things like this...I only now realized that, postage included, these babies'll cost me about $35 each. Better be some damn good Korean stuff on 'em!]

King is actually still in business. At least as of 2005. I saw heaps and heaps of King releases when I was living in Japan that summer.

I've got that Burmese disc ( among many others ) Very nice.