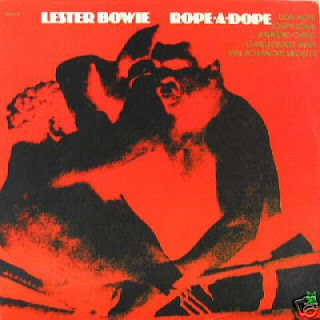 I recall this album, recorded in '75, released the following year, causing a bit of a stir simply because it was released on Muse, pretty much a mainstream label and despite a cover of "St. Louis Blues" (Chicago Style), there aren't many concessions to form here. The band here is Bowie, brother Joseph (pretty sure the first time I heard him), Favors (also fairly sure it was the first I'd seen him use his honorific, here rendered as "Megistus" as opposed to Maghostut or other variations), Raymund Cheng on violin (who I've unforgivably confused with Jason Kao Hwang recently), Charles Bobo Shaw (first sporter of dreads on the loft scene) and Don Moye.

I have a sneaking suspicion that I owned Bowie's previous release, "Fast Last" as well, though if so it's disappeared. This one's an OK, not great album, "St Louis Blus" getting a fun workout, mock serious, though they briefly develop a mighty groove toward the end. The title track's the strange one, an, erm, musical rendition of the Ali-Foreman fight in Zaire. The structure is alternating passages of musical "boxing" (rough and tumble improv and the members of the band intoning, in very drawn out fashion, "Rooope - Ahhhhhhh - Dooooooope". Hmmm....

My only other Bowie vinyl is "All the Magic" (ECM, 1983), a double LP consisting of one disc of solo work, one with a gospel/free band with Ari Brown (tenor, soprano), Art Matthews (piano), Fred Williams (bass), Philip Wilson and Fontella Bass and David Pearson singing. They cover "Ghosts" and "Let the Good Times Roll"; neither set is that interesting, unfortunately. Bowie does his fine "Charlie M"on the solo one, though.

The back cover, however, presents a photo from an event that I, to this day, kick myself for missing. I'm not sure of the exact year, maybe '79, but there was this massive event at Symphony Space, an orchestra made up of a Who's Who of NYC avant jazz under Bowie's conduction. Don't know the band size but I'm guessing over 40 musicians. I specifically recall thinking, "This has a huge chance of turning out to be a humongous mess" and didn't go. Well, for all I know I may have been right, but every report I've since encountered cites it as one amazing, stupendous concert. Dammit. In the photo, you can pick out Blythe, Braxton, George Lewis, Hemphill, Frank Lowe, Threadgill, Vincent Chauncy, many others I should probably recognize. Ah well...