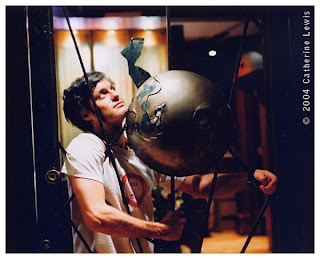 First night of SwissQuake last evening, a gorgeous day at the Issue Project Room site along the Gowanus Canal; cool, breezy, clear. Odd thing after the show was that the musical MVP turned out to be the sole American, the above-pictured Tim Barnes.

Four sets. The first a lovely, delicate trio with Barnes, Jason Kahn and Christian Weber, some 20 minutes of sustained quiet tension, very well handled. Next was the biggest disappointment of the night, a duo with Gunter Muller and Norbert Moslang. It was exactly like what one could have heard from the two five years ago except sapped of any vigor, of anything but going through the motions. I've enjoyed Gunter's recent solo work more than some (not saying that it's up to snuff with his best music by any means but I think it has its own virtues) and while I can't say the same of Moslang, I'm told he's done excellent solo sets in the recent past. Hard to say whether last night's music from the two is par for the current course or an anomaly.

After a short break came the highlight of the set, a fantastic duo with Tim Barnes and Tomas Korber. Miles apart from the set they did at ErstQuake in 2005, this was a quiet, super-intense performance, Barnes restricting himself to a large-ish (24" or so) gong, Korber in ultra-restrained mode on his electonics and guitar. In two sections, the first drone-y with soft scrapes and taps on the gong, the second, itchily active (though still quiet), with small rattles, rustles, bangs and clatter. Tough to describe otherwise except that it absolutely stood out as some seriously good music. Lastly was the Signal Quintet made up of the five Swiss musicians, a set that had its peaks and valleys but was ultimately unsatisfying; nice work throughout from Kahn, though.

Some grief was dealt a while back at Bags for the notion, put forth nonchalantly by myself and others, that there was any sort of "Swiss-style" eai that could be so conveniently encapsulated. Well, while that's of course a generalization, there's more than a little truth in it. These guys are fairly well funded by Swiss arts councils and one has the gnawing suspicion that, in some cases at least, this may have led to a certain amount of relaxedness and loss of acuity in the music.

Tonight, the Signal Quintet will perform a 2-hour work by Jason Kahn, "Timelines". Talking with Korber about it last evening, it sounds fairly loose in structure, with broad areas sketched in for the players as to length, volume, general sonic character, etc., within which a good amount of improvisation takes place. We shall see.

"Tonight, the Signal Quintet will perform a 2-hour work by Jason Kahn, "Timelines". "

actually, Tim will be participating also, and Jason will just be mixing, so it's the Signal boys plus Tim minus Jason.

Korber's become a big favorite of mine, Brian. Thanks for the review. I've only had the chance to hear him live once, but it was a memorable evening.