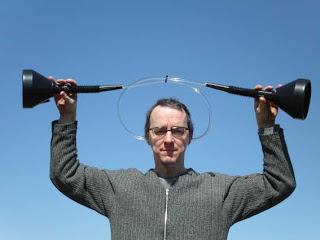 Yet another LP for which I can't find an image...Bosho's "Chop Socky" on the always intriguing, not always good Dossier label from 1987. Samm Bennett, pictured above in a more recent photo, was ubiquitous downtown for a few years, mid 80s. He had, for me, an initially intriguing, crisp sound but one that paled the more you heard it, not varying much from situation to situation. There was always a rockish rhytmic aspect that tended to drag things down. Bosho combined percussionists from three traditions with Bennett, Kumiko Kimoto and Yuval Gabay, joined here (invaluably) by guitarist/violinist Hahn Rowe. There was a time when Rowe was one of the more intriguing, difficult-to-pinpoint musicians in NY, someone I wanted to find out more about though, checking around now, it seems he abandoned improv for the club scene sometime in the 90s.

The album's OK as far as it goes and, I admit, is holding up better than I thought it would, but a certain sameness creeps in over the course of the disc something not helped by the presence of drum machines that nail the date as being from '86-'87. They were pretty rampant on a number of Dossier releases, actually. This fits in comfortably with the Bisi-engineered and produced stuff from the time--slightly "exotic", rock rhythm-driven, after all's said and done, slightly forgettable. The concluding track, "Boy Yaca" is the keeper if anything is.

I know Bennett's still very active in Japan and some of his work has shown up on those IMJ samplers, though nothing that's made my ears prick up.
Posted by Brian Olewnick at 5/13/2007 10:23:00 AM