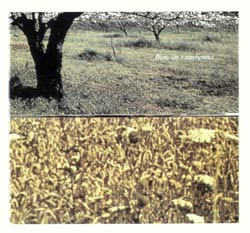 Did a small experiment at Record Club last night. By Tuesday, I was still having a tough time trying to choose my selections. I generally want to include at least one piece from my current listening but there hadn't been anything that really grabbed me (and which I thought could be reasonably, to some extent, latched onto by innocent observers in a single listen) that wasn't way to long to bring. Length is always an issue for me in this regard just due to practicality and to a degree, courtesy. When 7-8 people are playing two tracks each, probably averaging 4-5 minutes per, it can be a little overbearing to bring a half-hour long piece. The Rowe/Beins I brought once, at 28 minutes the record holder for this group, worked well but there were only 6 people there; still, that was pushing it.

Anyway, I was sitting there with five or six possibilities, not too happy with any of them. That afternoon in the mail, I'd received two discs from Ingar Zach, his trio with Thomas Lehn and Ivar Grydeland as well as the Sedimental release, "Flore de Cataclysmo" with Giuseppe Ielasi and Michel Doneda. I put on the latter just to give it an initial spin. Often, unless it's a recording I was very eagerly looking forward to, the first time I play it I'll sort of half-listen, getting the"feel" of it as it were, before giving more concentrated listens. So I was at the PC with this on in the background. I had the impression that the first piece was a bit dry, the second much better. About midway through the third and final track, my ears perked up and I said to myself, "Hey, this is very nice stuff here." The I said, what the hell, I'll play this piece tomorrow at Record Club, which is what I did. (My other selection was "The Animal Speaks" from the second Golden Palominos record, with John Lydon singing and belching)

It was an experiment for me since I'd only heard the piece once and even then, not so thoroughly at all, but I thought it might be interesting to trust my instincts and go with it. Worked very well. For my part, the music was as good and fascinating as I'd thought and the rest of the group dug it a bunch, asking a number of good questions. Thanks, Ingar!

Newly purchased, not yet heard: